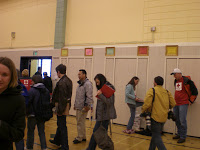 Okay, as promised, here’s a little personal insight behind the Portland Tribune article that appeared in today’s paper.
First, you should know that reporter Todd Murphy couldn’t actually make it to the Humboldt event on Friday and Saturday. That was okay, since photog extraordinaire L.E. Baskow came instead. L.E.’s a great guy who I’ve worked with on many stories — I even remember chatting with him for a while about this book.
Anyway, it was pouring out on Friday morning, so I lent L.E. my very chic umbrella from the Portland centennial (or something like that). While it came in incredibly handy initially, it soon stopped raining, so L.E. planned to leave it behind with Thomas and Mary Gibney, who he was following on the knock and talk. L.E. politely asked Thomas if they needed an umbrella. “No,” Thomas said. L.E. mentioned that it was mine and again asked if they wanted to hang on to it. “No, we don’t need it,” Thomas said. Ummm…thanks guys.
Point being, one week later, poor L.E. still has my umbrella, which Thomas and Mary didn’t need. And even though I have plenty of umbrellas at home, let it be said that I need it. So, thank you L.E. for being a good caretaker. I’ll come get it from you soon!
P.S. If you’re wondering why I included this rather awful photo, it’s because you can spot L.E. right in front in the yellow shirt. Sadly, you cannot spot the umbrella.