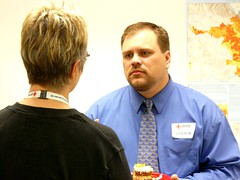 As Thomas mentioned a few weeks ago, we have a new Emergency Services Director – Eric Corliss. Yesterday was his first day, and we had a little meet and greet party for him. Staff and volunteers were invited to stop by and get to know Eric, and so in between mouthfuls of delicious carrot cake I drilled him with very important questions like, “Do you have pets?”

Here’s what I learned:
And now for the official facts from Disaster Operations Specialist, Rodney Rogers:
Did you know the Oregon Trail Chapter is now the regional chapter for the entire state? That means that the four community chapters (Oregon Mountain River, Oregon Pacific, Southern Oregon, and Willamette) now report their disaster activities through OTC. That means we’re in the loop when it comes to state wide response. (The community chapters have direct contact with OTC’s Operation Support Coordinator 24-hours a day.) And we’re the point of contact to national headquarters in Washington, D.C. This means our Emergency Services department is going to be busier than ever with the added responsibilities of providing people and supplies to the region. We’re glad that Eric is now here to help us take on that challenge.
P.S. This new system had its first test during the recent CSEPP (Chemical Stockpile Emergency Preparedness Program) drill in Umatilla. As OTC relayed real-time information to national headquarters about the pretend chemical release, representatives replied “you must be the new service area!”
Welcome, Eric.