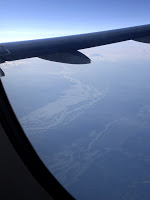 I’m back in Portland, safe and well.  Only partially buried under a backlog of emails that piled up while I was away. I’ll dig myself out eventually! I have a lot of things I’ve wanted to blog about in the past few days but haven’t had time. So expect some random catch-up posts in the next few days.

I’ll tell you more about my trip later, but right now I wanted to mention what happened on my flight home. As you know, I had been covering the flood response on the official Online Newsroom for over a week. Every day I typed the words Iowa, Indiana, shelter locations, etc. a gazillion times and posted dozens of photos of the relief efforts. It had become routine to me to see waterlogged houses and write about meals-served numbering in the tens of thousands. The shock of the scope of these floods had begun to wear off… until I looked out the airplane window and realized that I was staring right at one of the flooded rivers. I was, once again, in heart-wrenching awe. Our flight path took us directly over the flooded areas of Indiana, Iowa, and Missouri. For nearly an hour my face was glued to the window as we passed over soggy farms, damaged roads and broken levees. I half expected the pilot to mention it so that the passengers could see what they’d been hearing about on the news for weeks. I tried to capture it in the photo above, but I really couldn’t tell where I was aiming through the window.
Anyway, I hate to make this another post where I ask for money, but I’m just gonna put it out there that this disaster is huge and if you want to help out by giving to the Disaster Relief Fund, the link is here. Or if you just want to help by spreading the word on Facebook or Myspace, here’s that link. That’s all I’m sayin’. And now that I got that out of the way, look for more fun posts from me in the coming days!