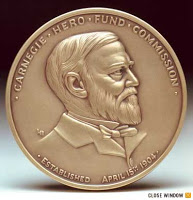 Part of our goal here at the Red Cross is to give people the skills to save a life — their own or someone else’s. And two Oregonians have recently done just that…in a big, nationally-recognized way.

For their heroic efforts, Curtis Dawson (Astoria) and Dennis Morton (Prineville) have been honored with a Carnegie Medal (Morton was previously honored by the Oregon Mountain River Chapter of the American Red Cross). The medal is awarded to those who risk their lives to an extraordinary degree while saving or attempting to save the lives of others. In fact, seven awardees lost their lives in the performance of their rescue acts.

Both of these men committed these acts of heroism — rescuing a tugboat captain from drowing and pulling a woman from a burning house — on behalf of people they didn’t even know. And they put themselves in major danger to do it.

These are the kind of heroes that we hope to honor every year at our annual Breakfast of Champions event. If you know of any amazing hero stories, feel free to pass them along at any time.