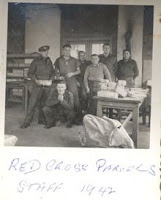 Little to no food. Hard labor. Disease and sickness. Sights described as “man’s inhumanity to man.”

These are the things that Australians Frank Cox and John Crooks experienced some 65 years ago when they were prisoners of war. Recently, they repaid what they call a “debt to humanity” by making a substantial donation to the Australian Red Cross.

Frank and John’s stories are worth reading in their entirety, but I’ll pull out a couple of the less stomach-churning details.

It was in Greece in April 1941 that John was taken to Corinth, a ‘transit’ prisoner-of-war camp, where he first came into contact with ICRC delegates. “They brought with them a supply of ‘goodies’, of which I scored a toothbrush, a box of matches and a ‘neck to knees’ nightshirt,” says John. “I was grateful for the first two, but I was relieved that I had disposed of my camera, so I could not be coerced into having a photograph taken of me wearing the nightshirt!”

Frank moved to Groppenstein, a former Nazi youth camp. Here he endured hard labour working in a road gang, carrying out tasks that included breaking rocks with a pick and shovel. For Frank and the other POWs, the arrival of Red Cross parcels at the camp brought “a ray of light in a sad, dark part of the world.”

Explaining today why they felt they “owed a debt” to the Red Cross, Frank and John said Red Cross parcels had helped to keep them alive. “Had it not been for these people with their packages of food, I, and many others probably, would not have made it home,” says Frank.

The visits by Red Cross delegates checking on conditions in the camps were also important. “These visits really buoyed the prisoners up.” Being able to keep in touch with their families during these dark times via Red Cross messages also helped. However, there was a period when they were first captured during which they had no contact with their families. “This caused our families considerable anguish, and you can imagine their relief when they received Red Cross messages advising them we were alive and well,” says Frank.

While the amount of the donation wasn’t included in the story, I can tell you that the gift will be used to reunite families separated by conflict or disaster around the world. A fitting way to bring closure to their experience, don’t you think?