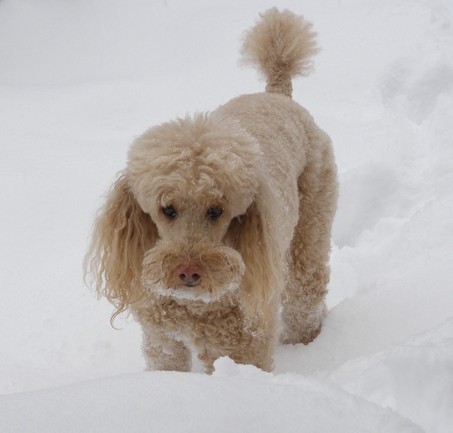 If you saw this face, you’d do whatever you could to save his life, wouldn’t you?

And what if that involved putting his entire snout in your mouth? Would you still do it?

According to this article, yesterday morning, 7-year-old Prince the poodle was hit by a car. Dehning heard a yelp, hopped his fence and ran to the dog, which was bleeding from the nose and a paw. Prince stopped breathing in his arms.

Without thinking, Dehning wiped off the blood and put Prince’s entire snout in his mouth. “I blew into his nose,” he said. Dehning heard gurgling. Then he saw Prince’s chest rise. His wife, Mary, who’s a nurse, performed chest compressions. The couple kept at it for a good minute, until Prince started breathing on his own.

After being rushed to a veterinarian, Prince was released last night.

Dehning, a dog owner himself, said he couldn’t have let Prince die without trying to help. “I love dogs,” he said. “But I would have done it if it was a cat.”

Want to be just as prepared for pet emergencies as Tim Dehning? Consider signing up for a dog or cat first aid class. The life you save could be your pooch’s!