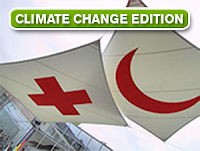 Welcome to a special edition of the Worldwide Wednesday Wrap-Up, in which we consolidate the international Red Cross and Red Crescent news into one list of bite-sized links for you.

This week world leaders are gathering to discuss climate change at the United Nations Climate Change Conference (COP15) in Copenhagen, Denmark, and the Red Cross will have representatives in attendance. So this week’s Wrap-Up will focus on how we’re contributing to the conference as well as ways Red Cross and Red Crescent societies are adapting to climate change worldwide…

[The place names link to maps so that you can get a quick idea of the region.]

SENEGAL: The Red Cross/Red Crescent Climate Centre tested out a simple card game in St. Louis, Senegal illustrating the odds of flooding and other natural disasters increasing with climate change. The game was designed in collaboration with the PETlab – a joint project of Games for Change and Parsons: The New School for Design in New York City. It will be officially unveiled and demonstrated on December 13 in Copenhagen.
TUVALU: The Tuvalu Red Cross Society is joining forces with the local government and other humanitarian organizations to tackle climate change, using methods like cleaning up debris that may cause damage during cyclones, broadcasting reminders about preparedness and water conservation, and placing satellite phones on remote islands to improve warning times. It already paid off when a large wave flooded the low-lying island nation.
ETHIOPIA: The Netherlands Red Cross reports on new techniques for helping farmers in Ethiopia adapt to Climate Change in a short film called Farmer To Farmer Learning in a Changing Climate. Get a sneak peek of the film, which will be shown at the COP15 Film Festival.
COPENHAGEN: A Danish Red Cross photographer has set up an exhibit at COP15 of photos from around the world. You can check out the online photo gallery as well. (The photos from Uganda were taken during a Red Cross flood response in 2007.)
ONLINE: What’s it like to head up the Red Cross/Red Crescent Centre on Climate Change? “It’s daunting,” says Madaleen Helmer in the latest Cross The Globe podcast.