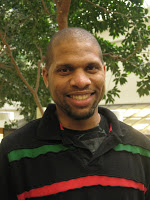 Kenneth Branch used to play basketball everyday. It was his favorite activity, along with road tripping with friends. These days, instead of hitting the court or the road, Kenneth spends most of his time undergoing dialysis treatments for kidney failure. He—along with 81,884 other Americans—is on the kidney transplant waiting list.

In 1996 at the age of 16, Kenneth’s kidneys completely shut down. He wasn’t feeling well during class, but tried his best to ignore the pain; he really didn’t want to miss playing basketball later that day. Kenneth realized he had more than just a stomach ache when he felt too ill to even dribble a ball. A few hours later, he was in an emergency room.
A year after Kenneth’s kidneys stopped functioning, his mother was able to donate a kidney to her son. The transplant was a short-lived success; four years later, Kenneth was again in need of a kidney. He has been on the kidney transplant waiting list for nine years.
“It’s just a waiting game,” says Kenneth about being on the transplant list. “It’s an up and down thing. Every time the phone rings, you hope it’s the call you’re waiting for to tell you they’ve found a match for your transplant.” Although Kenneth says he tries to be optimistic, he also admits that waiting can be rough at times: “It’s stressful. I’m always thinking ‘Is this the call?’ Especially if my phone rings and it’s a number I don’t recognize.”

In the meantime, while Kenneth waits for the call that could save his life, he must go through frequent dialysis treatments. Dialysis is a medical procedure that artificially conducts functions of a healthy kidney, such as ridding the body of waste and unwanted water from the blood. The process is exhausting for Kenneth and causes frequent cramping throughout his body. But it’s something he has to do, “just like a part time job.” Kenneth spends three days a week for four hours at a time undergoing dialysis treatments. “The dialysis unit employees become your second family,” he says. “I spend more time there than I do at home.”

Despite all of the physical and emotional stress Kenneth has experienced during the past 14 years, he remains hopeful about his future. “I try to keep my mind focused on positive things instead of negatives,” says Kenneth, “I just know that one day I’m going to get that call.”
Eighteen people in the United States will die today awaiting an organ transplant. Donate Life Northwest urges people to help save lives like Kenneth’s by signing up to be on the Donate Life Northwest Organ, Eye and Tissue Registry. For more information about the registry, visit DonateLifeNW.org or call 1.800.452.1369.
Those who wish to speak to a Donate Life Northwest representative in person will have the opportunity to do so at the “Dr. Martin Luther King Jr. Blood, Bone Marrow and Organ Donor Registry Drive” on Saturday, January 23 from 7:30 a.m. to 1 p.m. at the Red Cross Portland Donor Center (3131 N. Vancouver Ave.). If you’d like to make an appointment to donate blood at this special event, please call 1-800-GIVE LIFE or click here. African Americans sometimes have subtle differences in red blood cell proteins, increasing the likelihood that a suitable blood donor for a recipient will be someone with a similar ethnic background.
Photo: Kenneth Branch, 30, of Vancouver, WA has been waiting for a kidney transplant since 2001.