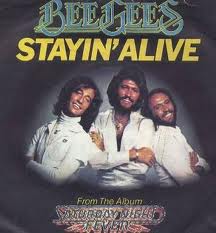 Picture the scene: the man in front of you has collapsed, his heart has stopped and only you can save him by performing CPR (cardio-pulmonary resuscitation). Is now the time to start sifting through your mental musical jukebox for an up-tempo number?
Up until recently, the answer would probably have been yes. For a while now, potential life-savers have been encouraged to mentally follow certain songs in order to keep up a steady rate of CPR compressions. In the US, people have been advised to follow the beat of the Bee Gees’ Stayin’ Alive song. (In the UK, Nellie the Elephant was evidently the preferred track.)
But a study, published in the British ‘Emergency Medicine Journal’ a few months ago, has shown that such musically-themed interventions often aren’t effective. Sing-song life-savers tend to concentrate so much on keeping the right rhythm that they don’t compress the victim’s chest deeply enough.
The American Red Cross recommends a rate of 100-120 compressions per minute during CPR – but also stresses that the chest should be compressed by 2 or 3 inches. Correctly performed, CPR is life-saving and can triple survival rates – but unless the compressions are deep enough, the study concluded, you’re essentially using someone as a drum kit while singing Stayin’ Alive.
The study measured responses using a number of ‘recommended’ songs (including, inevitably, Achy Breaky Heart by Billy Ray Cyrus) and found that more than a third of compressions were too shallow, regardless of the piece. The study concluded: “We are unconvinced that music provides any benefit in improving the quality of CPR…and suggest that this interesting but unproductive area of resuscitation research should be discontinued.”
Music or no, the key thing is to try to help. As a spokesperson at the Red Cross put it: “It’s important not to get too distracted by the mechanics and rules of applying CPR. Dial 911, and start giving steady chest compressions until emergency help arrives.”
And consider taking a refresher course in CPR, to learn the latest techniques. Sign up for a local course at the American Red Cross website.