A new disaster product, the Water Bathtub Oblong Bladder, or WaterBOB™ for short, was just released. Oh man, that came out sounding weird about releasing bladders… Um, what I meant was, Hey, there’s a new cool thing to go in your disaster kit!

It’s a basically a giant plastic bag that stores water in a disaster, but it’s cooler than that. It’s food grade plastic to avoid contamination, it’s got a spigot, and it’s the size of a tub when filled. And it’s apparently the “#1 Hurricane Product of 2007,” whatever that means.

The WaterBOB™ is a fresh water containment system used to store up to 100 gallons of potable drinking water in the event of natural or human-caused disasters where supplies become scarce or water is shut off. Water can be stored for up to 2 weeks in a controlled environment. Please note: The WaterBOB™ is intended for a one time use only.

Put liner in tub and hook to faucet. 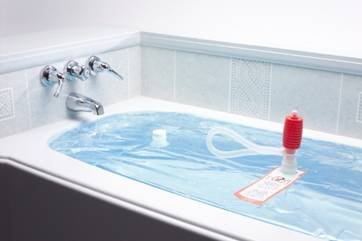 I think these things are retailing for about $30. I don’t know yet if we’ll be selling them in our Chapter’s store, but I think they’re cool anyway. Here’s the official site.