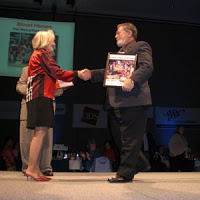 As we all know, Portland is a small town that likes to think it’s a big city, so it’s not really a surprise to run into people you know. Even so, at this year’s Breakfast of Champions, one connection threw me for a loop. Here’s the story…

The Weiss/Parker family were recognized as our Red Cross Blood Heroes for donating more than 150 gallons over the years. That’s GALLONS, folks.
Sam Weiss, the family spokesperson and all-around PR savvy guy, suggested that I pitch their story to The Jewish Review. This seemed entirely reasonable to me, but when the reporter asked for some specific examples of the family’s Jewish connections (i.e. synagogue membership), I was at a loss.
So I went back to Sam and asked for more info. He politely told me that they were former members at Neveh Shalom and that he’s the ombudsman for Rose Schnitzer Manor and the Robison Jewish Health Center. Oh, and — if I needed more proof — Sam and I are related.
Turns out that Sam’s wife is my aunt’s cousin. Or something like that. And what’s more, Sam’s daughter used to babysit for my little brother. You can imagine how much fun it was for her to see me at the event, 15 or so years later.
Anyway, that’s today’s lesson in Jewish geography. And now you can read today’s Jewish Review article about the Weiss/Parker family and their incredible gift!