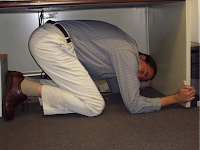 They say you can’t really predict earthquakes. But I know, with absolute certainty, that one will hit my office sometime this week.

…Okay, before I freak anyone out, it’s just an earthquake drill. Every year our AmeriCorps team organizes a drill during Earthquake Preparedness Month (sometimes known to those outside the Red Cross as “April.”) They’re kind enough to let us know which week it will happen. Then sometime during that week they will spontaneously start roaming the hallways shouting “Earthquake! Earthquake!” and we all have to Drop, Cover, and Hold On. Then, they evaluate each of us on our performance…and sometimes take photographic evidence of our hilarious attempts at safety stances. (For example, the above photo of our 7-foot-tall co-worker, Mark, dutifully – and impressively – maneuvering his lanky frame underneath his desk.)
Wish us luck (or at least survival). This should make some photos for our I’m Red Cross Ready Flickr pool.