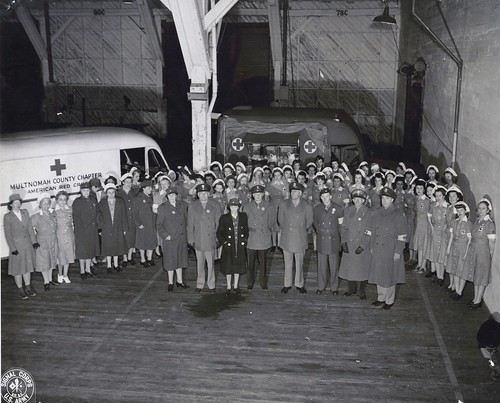 Edith O. Miller, a remarkable friend to the American Red Cross in Oregon, passed away last week at the age of 104. She had been a Red Cross volunteer for 85 years – beginning when she was 13 years old, rolling bandages during World War I, and then becoming a regular volunteer at the blood services reception desk. Not only did she give her time and talents to the Red Cross, she was also a faithful donor.

But Mrs. Miller was a remarkable woman apart from her Red Cross contributions as well.  According to The Oregonian, she was one of the original (possibly the original) Rose Festival Princesses back in 1922. She and her husband also owned a successful department store called Miller Clothing for many years. And what was her secret to longevity? Well, apparently steak and chocolate. An “unrepentant chocoholic,” according to her son, two of her favorite things were See’s chocolates and the Ringside Steakhouse.
Mrs. Miller was a role model for all Red Crossers. Our hearts go out to her friends and family – especially her son, Alan, who is also a great supporter of the Red Cross.