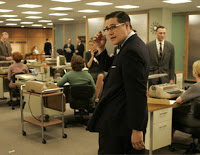 After a very crazy two weeks, I had the chance to finally catch up on a little television this weekend. So I apologize that I’m a full week late in asking if you caught the Sept. 28 episode of Emmy award-winning Mad Men?

If you did see it, you’d know why I’m so enthusiastic — the Sterling Cooper offices held a blood drive!

The episode jumps right in with a planning meeting for the drive. Kinsey is bragging about how creative is going to win. Don tells creative to pull all the “lackeys” and make them copywriters for the day in order to win. The prize is for a high rate of participation? “Helping another human being,” of course.

When asked why the blood drive matters, Don says: “This is for mankind, Kinsey… also, there will be women fainting.” Always the ad exec, he follows with, “And put some posters up! I can’t believe I have to tell you guys that.”

At a later point in the show (and I really wish I had a screenshot), they show the blood drive poster. It’s two cupped hands (think AllState) and says, “Saving lives is in your hands. Give blood.” I tried as hard as I could to find a Red Cross logo, but to no avail.

Really, though, wouldn’t it be cool if Sterling Cooper gave up on American Airlines and Maidenform and added the Red Cross, pro bono?