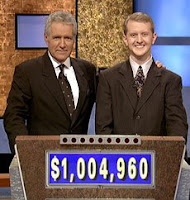 I used to…every night. It was always a competition around the house to see who could come up with the right answer first. Thank goodness it was a pretty even match or there could have been some ugly arguments.

I mention this because if you were watching Jeopardy last night — like Tara, who sent in this tip — you would have seen the following Final Jeopardy question:

This international organization that was founded in Europe lists “Neutrality” and “Voluntary Service” as two of their seven fundamental principles.

Why us, of course!

If you want to be as smart as a Jeopardy champion (like our hero, Ken Jennings), you should probably read up on the fundamental principles yourself. You can thank me later with a portion of your winnings…