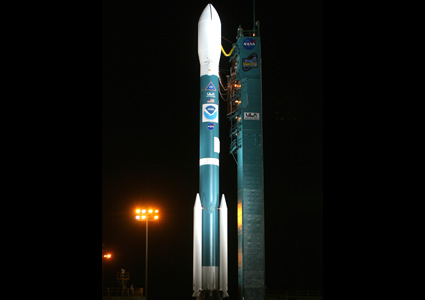 Hello from the PDX airport waiting area! (I’m waiting to board the plane to Chicago.)

Since I told you about the NOAA-N Prime satellite yesterday, I thought I should let you know that the flight – scheduled for 2:00am this morning – was scrubbed  when a launch pad gaseous nitrogen pressurization system failed.
This, apparently, is not too major an issue since NASA says they could reschedule the launch for as early as tomorrow morning (yes, at the same ungodly early hour).