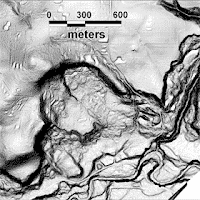 Whether they come from the mouths of cats or the wings of airplanes, lasers are totally awesome. But since technology isn’t quite ready for the former, I bring you the airplane-mounted version — more affectionately known as LIDAR (Light Detection and Ranging).

LIDAR uses laser imaging to produce susceptibility maps that can determine “not only levels of landslide risk for a given area, but types of probable landslides in hopes of preventing future development” in more vulnerable areas.

According to this article, developers were often required to have a geotechnical study done by an expert to determine the landslide threat. But even experts were making best guesses based on topography, dirt samples and their own surface observations.

Now, “a geotechnical engineer is going to be able to take this data and make a much better determination on an area,” says James Roddy, earth sciences information officer with Oregon’s Department of Geology and Mineral Industries (DOGAMI). “Before, they (could) go out and look at something, but if it’s all covered in blackberry bushes and trees, your guess is as good as ours. Obviously they’re a little bit better at guessing … LIDAR’s able to strip all that away and you’re able to look at bare earth and make much more critical and accurate determinations on slope stability and things like that.”

From there, local governments can use the information to work with developers on mitigating risks of new construction…and potentially pinpointing areas that shouldn’t be developed at all.

While the LIDAR susceptibility maps are still being reviewed, Oregon does have comprehensive landslide maps online. And if you do live on or near a landslide, get tips for staying safe at www.oregonredcross.org/landslides.