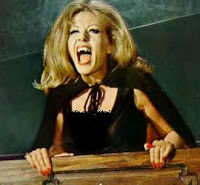 Since lots of people think I look much younger than I am, I’ve decided to make an effort at appearing (key word, appearing) more mature. Big words make people sound old and smart, right? With this thought, I signed up for Merriam Webster’s Word of the Day email which sends me daily vocab words and their definitions.

A few days ago the word of the day was incarnadine (in-KAHR-nuh-dyne), which is an adjective meaning: “red; especially : bloodred”

Since I work for the blood services, blood is often on my brain (in a non-weird, non-Vampire way). This got me thinking about other blood-related words. Here are some to impress your friends with…and maybe even creep them out a little!

I know I probably always sound like a bit of a sanguisuge at the end of my blog posts, but, as always, I’d like to encourage readers to help save some lives by donating blood. We won’t exsanguinate it all, we just want a pint or two!