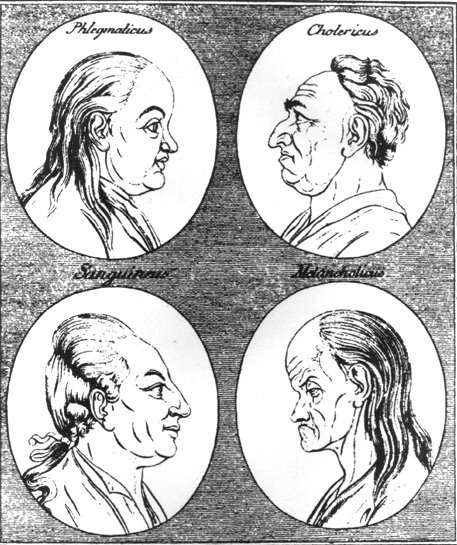 Are you feeling off today, like maybe your four humours are a bit out of wack?

Humourism, a theory originating in ancient Greece, believed that the body was composed of four major fluids — blood, black bile, yellow bile, and phlegm — called humours. An imbalance of the humours would cause a person to be sick. A healthy person’s humours were in perfect balance.

Eventually, an imbalance of humours went beyond physical health to reflect psychological characteristics in people. The Four Temperaments Theory matches a person’s personality type with their body’s balance of humours (which relates nicely to this blog post about blood groups and personality). For example, someone who is sanguine—having too much blood—was described as so:

… light-hearted, funloving, a people person, loves to entertain, spontaneous, leader abilities, and confident . However they can be arrogant, cocky, and indulgent. He/She can be day-dreamy and off-task to the point of not accomplishing anything and can be impulsive, possibly acting on whims in an unpredictable fashion. (From wikipedia.org)

You know, I think the sun and heat are causing me to feel a little too sanguine lately, like maybe I have an unnecessary surplus of my blood humour. Hmmm… how could I possibly remedy this?

If you’re feeling a little too sanguine, too, call 1-800-GIVE-LIFE or visit http://www.givelife.org/ to make a life-saving blood donation appointment. Don’t forget to bring a friend (I’m donating with my mom later today). BONUS: Avoid the heat–donate blood at the Portland Center building (3131 N. Vancouver Ave.) where it’s cooler than a polar bear’s toenails.