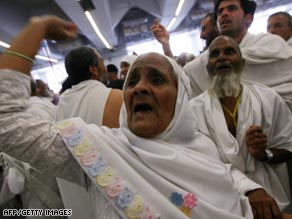 Sometimes candy helps high school kids win class president…and sometimes $10 bills help volunteers exit a plane faster. After a plane crash in Manchester, UK, safety researchers attempted to recreate panic in a lab setting. They didn’t get the results they wanted. Their volunteers had no incentive to get to the plane exit first…But, with the help of a $10 reward to the first people out of the plane, a near-fatal stampede occurred!

Whether at an IKEA opening in England or the annual pilgrimage (or hajj) to Mecca in Saudi Arabia, tragedies from crowd violence often are a preventable phenomenon.

“People will panic, the legend says, so we can’t trust them with the information or the training — the basic tools of their own survival.” This quote from Amanda Ripley’s book The Unthinkable illustrates the unfortunate mindset of too many emergency officials. Often the assumption is that when individuals know the realities of a disaster, panic will ensue and tragedy will become inevitable.

My favorite moment in Ripley’s book was the explanation that “trust is the basic building block for any effective warning system.” Instead of blaming the crowd or fate after panic strikes, officials must trust people with the realities of a potential disaster situation. For example, at a Starbucks near the Potomac River (where floodwater has risen in past years), the water level is illustrated on window paintings. That’s a really creative way to familiarize individuals on the reality of their surroundings!

Visitors to Mecca should be wary that the stoning of the jamarat is a particularly dangerous part of the hajj (where sudden crowd movements can cause people to be crushed). That information should be topicalized, even if it is frightening to consider. People need to be trusted more, because ultimately, the aftermath of a disaster will be determined by the crowd, not the emergency planner.

“Stoning of the jamarat” image courtesy of Getty Images.