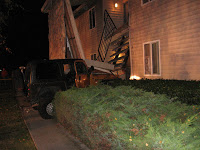 Sounds like the makings of a good joke…but it’s not.

Last night, our disaster volunteers responded to an unusual call — a Jeep had been driven right into the stairwell of an apartment building in Oregon City. See the photo here.

While no one was injured, upper floor residents had to be assisted down via their back balcony due to the destruction done to their stairs.

And even though there was no damage to the structure itself, Clackamas firefighter crews worked for several hours to shore up the front of the building until a construction team arrived to rebuild the concrete and steel stairway.

Since the 10 residents (from four apartments) won’t have power — or much in the way of access — we’ll be helping out with food, shelter and clothing in the interim.