“As part of its largest international response since the 2004 Indian Ocean tsunami, the global Red Cross network has helped nearly 1.9 million Haitians since the country’s January 12 earthquake. It has so far spent or allocated $106.4 million to meet the most urgent needs of earthquake survivors and will continue to support hundreds of thousands of additional survivors in the years ahead until the last donated dollar is spent.”

You can currently see a summary of the relief effort progress online, with several key numbers including: 400,000 relief items have been handed out, 600 responders have been deployed, assistance for 25,000 people arriving in the United States, 1,800 units of blood provided, and even 1,100 latrines have been constructed.

The statistics don’t end there though. On a somber note, a article by LiveScience yesterday took a look at annual death tolls from natural disasters. Only two and a half months into 2010, the death toll has exceeded the annual averages from 2000 to 2009 by about three times. While those years had an annual average of 78,000 deaths from natural disasters, the earthquake in Haiti alone is believed to have resulted in at least 220,000 deaths (2009 had only 10,416). Other noted major disasters so far this year include earthquakes in Chile and Turkey, as well as snowstorms in China and the US Northeast. 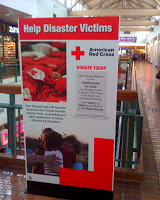 Help is still needed! You can donate money online now or by texting ‘Chile’ or ‘Haiti’ to 90999.

Photo to right: A quick picture I took yesterday at Salem Center Mall, which had several of these large signs asking for help with the Chile earthquake relief.