When one hears about all of the activities the Red Cross is in the process of undertaking internationally, one can’t help but question what would happen if disaster struck here. A recently found document from 1936 allows us a peak as to what happens during a disaster, from the command centers’ perspective. A log from the command center of Oregon Governor Charles H. Martin 74 years ago this week when the Oregon South Coast was threatened by fire, a fire that destroyed the community of Bandon. 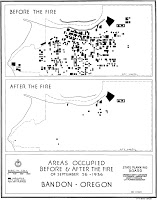 “This document gives a complete new insight into the destruction of Bandon in 1936,” notes Judy Know, the executive director of the Bandon Historical Society Museum. “It tells a lot about how the fire was perceived and fought, and how a variety of people and agencies — from an empathetic resident of Salem to the massive federal government — responded to the catastrophic events here. It’s an inside view and a completely different perspective that none of the fire’s survivors or Historical Society members had ever had our hands on before.”

Here are some excerpts from the document, with more available at The Bandon Western World–

10 a.m.: National Guard units at Clackamas, Eugene, Roseburg and Grants Pass put on alert. U.S. Coast Guard Cutter Pulaski from Marshfield is anchored off Bandon and waiting for flood tide; Cutter Onondago from Astoria to arrive at Bandon around 8 p.m.

8:50 p.m.: Highway Commission concentrating on keeping communications open and enabling free movement of firefighters and evacuees, if necessary. Twenty commission trucks and 150 men sent to the area from Eugene and Grants Pass-Medford. Two men with firefighting equipment assigned to each wooden bridge.

4:10 p.m.: Telegram received from President Franklin D. Roosevelt — I am much distressed at reports reaching us of the disastrous coast fires. Stop. Please keep me fully advised. Stop. I am instructing all federal agencies to render whatever assistance possible.

4:40 p.m.: Gov. Martin’s reply — Fire situation greatly improved due to higher humidity and low velocity of winds. Stop. No other cities in immediate danger unless weather conditions change for the worse. Stop.