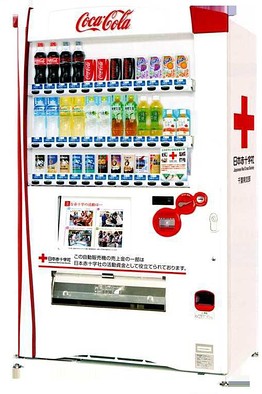 Let’s talk drinking and donating for a minute. Here’s a simple chart:
Water + Donating Blood = Good
Alcohol + Donating Blood = Bad
Soda + Donating Change = Awesome
As proof of the latter, I give you these cool new vending machines straight outta Japan. As mentioned on the Wall Street Journal blog, “Rather than collect the change from a canned coffee or sweet soda, customers can elect to donate it to the March 11 earthquake and tsunami relief fund set up by the Japanese Red Cross. Donations can be made in ¥10 or ¥100 increments. After making a donation, a voice pipes up thanking customers for their good deed of the day.”
Sure, one could argue that sodas aren’t good for you, but better to save a life than die of thirst, no?