Cross communications volunteer Patrick Wilson goes behind the scenes to
talk with volunteers across the Cascades Region to learn about their
Red Cross work and how they got involved with the organization. 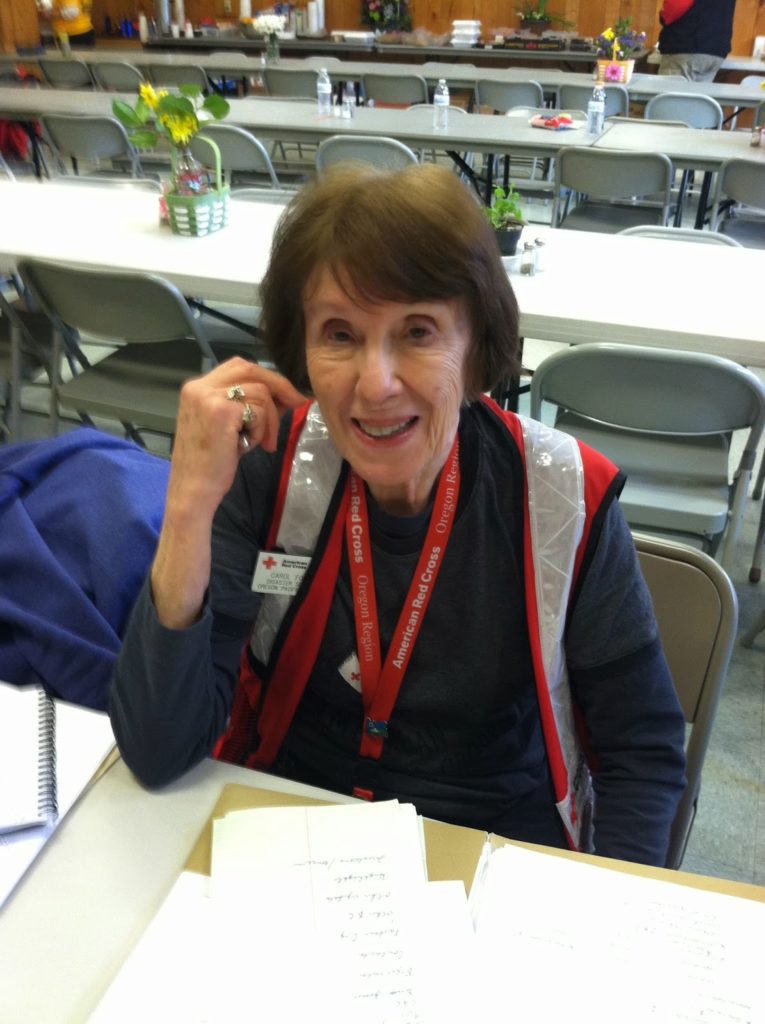 Carol
Foster owns a small bookstore in Florence, Ore., that has been in business nearly 24 years. Books ‘N’ Bears is what the store is called and shows Carol’s concern for ensuring there was a
plan for caring for animals in her community if disasters occur. After
searching fruitlessly for some time and finding nothing of merit, she reasoned
that it made the most sense to join the Red Cross, the one major community
agency most focused on providing disaster relief. She was impressed from the
start with the abundance of classes that were provided for volunteers and the
small amount of money the Red Cross spent on administration. She became a
volunteer with the Oregon Pacific Chapter of the American Red Cross in
Florence, Oregon in 1996.

Carol soon became captain for the
local disaster action team, tasked with providing both local and national
support. She also assumed responsibility as a government liaison. While Carol
has assisted with a significant number of national disasters over the years,
she says that the most memorable was her first, when she was called to aid the
victims of Hurricane Charlie. Then Hurricane Francis struck on the heels of her
first deployment. “It was my maiden experience, and there were
challenges and surprises,” Carol says quite emphatically. “I was
scared when I took on this assignment. There I was at two in the
morning in a strange airport in a strange town, unsure where I was going and
with nobody around. Then I remembered I had an 800 number in my pocket that I
had been directed to call. I called and got some direction, I was on the go
again.”
On the day she reported to duty, she vividly
recalls the situation that confronted her. “As we drove up to the
building that was going to serve as our shelter, there was a line of huddled
storm victims wrapped around the building, waiting to for assistance, even
though the center wasn’t even yet operating. We processed people all day. I
was exhausted by the immensity of the task we faced, caring for so many
desperate people standing and anxiously waiting for our help. Our job was to
register everybody, complete casework on all of them and get them into
temporary shelter, either there or at local hotels.
After a long and taxing day, the
volunteers were directed to local lodgings. They began to unpack when they were
told another hurricane was about to strike. “We were directed to
immediately pack our overnight needs and to be prepared to be transported to a
second shelter. This new shelter the capability to house 400 victims but we
eventually had to accommodate more than 500. It was a long day and we were well
worn before we closed our eyes that night. After three demanding weeks, my
first national assignment came to an end.”
NOTE:  Carol Foster recently returned from nearly three weeks in northern Washington, working with other Red Crossers who helped community members affected by the Oso mudslide.