Skip to content
Our
Volunteer Profile series, written by communications volunteer Patrick Wilson,
offers a weekly glimpse at some of the incredible people who help to deliver
our mission. We are grateful for their compassion and commitment. 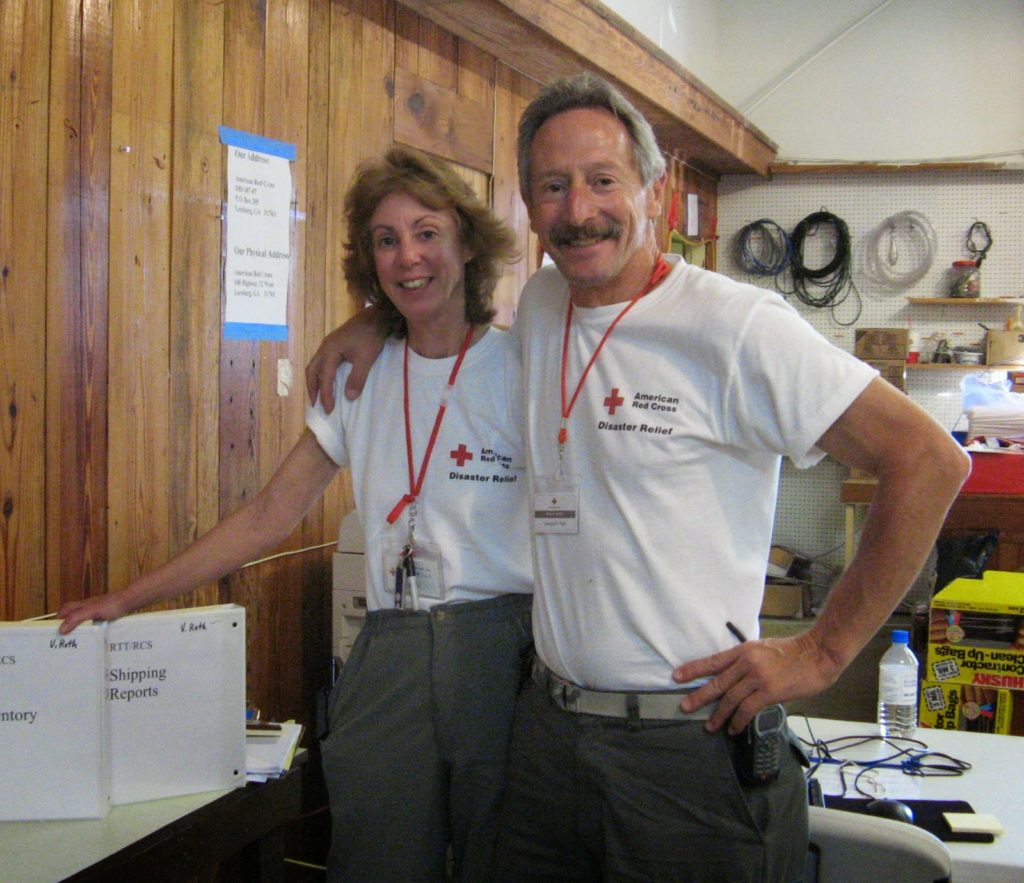 By January 2005, George and Virginia Roth both were retired
from a local community college where Virginia was an instructor and George was
the IT director. One night, while watching news coverage of Hurricane Katrina, they
were overwhelmed by the devastation and hardship flooding the screen. As they
viewed the Red Cross volunteers in their red vests striving to lessen the loss and suffering of those
affected by the storm, they saw a potential second career. Soon thereafter they joined the Oregon Pacific Chapter
of the American Red Cross.
“We expected to be sent to a disaster site right away,
but discovered that we had to attend weeks of training first,” says George.  “The Red Cross wanted us thoroughly trained. Having a
Disaster Academy, like the one that just occurred, with all the classes at one
location would have been great. Instead we traveled to Medford, Eugene, Albany,
wherever training was available.”
“Our last class,” Virginia adds, “was client case work and our names were called for
national alert assignments before we could finish it. We completed reading the
client casework on the airplane.”
Besides understanding the importance of training, George
and Virginia soon realized there was a ‘Red
Cross way’
of doing things. Not only is everyone
thoroughly trained, the Red Cross ensures everyone uses the same systems and
processes.
Even
though George had been an IT Director for 25 years, he worked hard to adapt to
the Red Cross way of doing things.
As soon as they
returned to Oregon, the pair launched into working with the local chapter and
the national organization and become better prepared to assist with future
disasters. They both delivered local training. Virginia was placed in charge of
local disaster volunteer coordination, and became immersed in coordinating the
activities and training of all local volunteers. George focused on making
certain the local technology was integrated with the national systems, and
became the volunteer lead for the National Shelter System for the next two
years. He was responsible for the management and support of 65,000 shelters and
the required volunteers, as well as the creation of specialized reporting. At
this time, volunteers were going to manage the system all across the United
States, to include creating a team that would be available 24/7. The
information of what shelters were available and open in each area had to be
easily accessible, as well as the capacity of each shelter. The United States
would soon be hit by even larger hurricanes, such as Hurricane Gustav and
Sandy. Red Cross capacity would be tested as never before. George was
authorized to recruit and train a national support team of volunteers. All the
necessary procedures and protocol had to be written and a shared data base
created. Because of his excellent work, George was presented with The
President’s Award for Excellence
in Disaster Services by the Red
Cross. “We flew to Washington to receive the award,” says Virginia. “It was
quite an honor.”
Hurricane Sandy hit while they were there
and they spent three weeks helping coordinate the relief effort from National
Headquarters in Washington, D. C. Virginia worked with the national crew
handling mass care, assisting the seven devastated states.
Systems were set up to scan social media. During the
day they received tweets from victims.  Locations were identified and sent to mass
care so the managers of those areas could respond. “We discovered, for example, an older couple was
trapped on the 12th floor of their apartment building with no electricity, heat
or food. They needed help immediately,” says
Virginia.
George and
Virginia have been working together for 40 years. They say working at the Red
Cross in demanding situations has only made their relationship stronger. “We know each other’s strengths and work well together as a team,” says George.