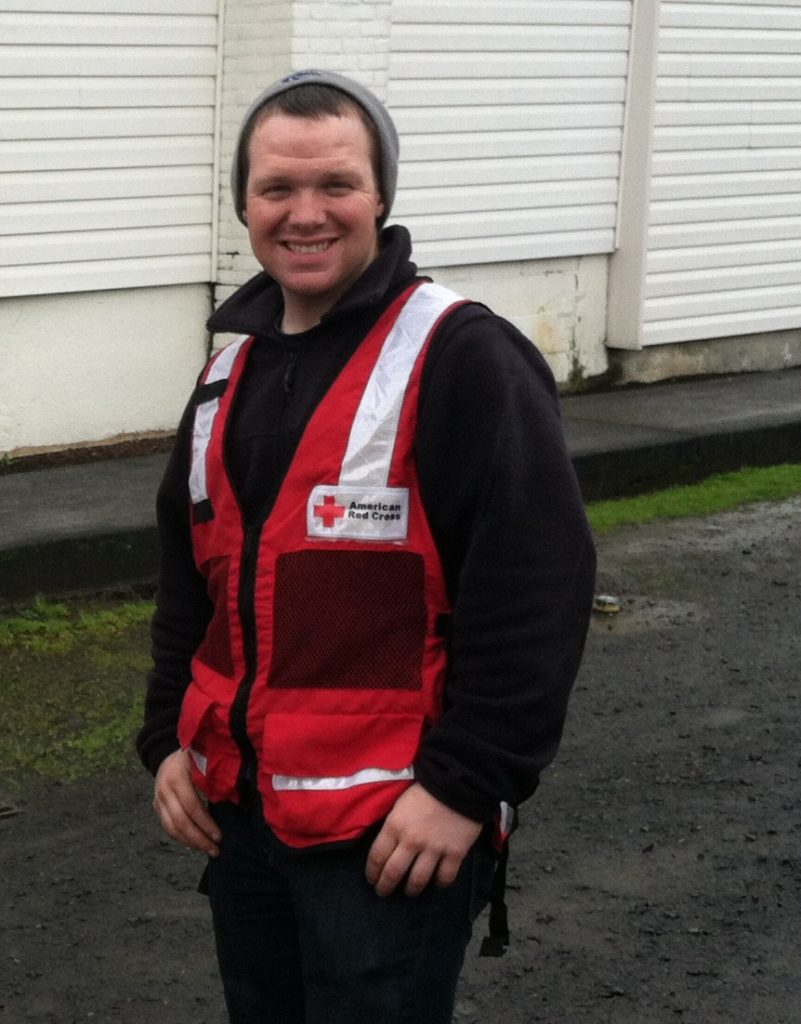 Andy Humber grew up in
Boise, Idaho, living there through most of his youth before coming to Oregon.
He completed high school and attended a community college in Oregon. While
still in high school, Andy worked in Red Cross Blood Services and developed an
interest in disaster services. He began volunteering with the Northwest Oregon
Red Cross chapter in 2011. He is also studying to become a licensed minister.
Andy says, “I really appreciate the opportunity to learn from other more
experienced volunteers, developing my technical skills, and my interpersonal
and teamwork capabilities.” In addition, he is attracted to the strong family
feeling at the Red Cross. He likes volunteering so much he has also recruited
several friends as volunteers.

A major learning experience
occurred for Andy when he and several peers were sent to support disaster
relief for Hurricane Sandy. Deployed to New York just before the brunt of the
storm struck, Andy’s group was directed to move needed supplies to Yonkers.
Upon arriving they learned that the city of Yonkers was opening a shelter and
the Red Cross was asked to provide staff. The Yonkers team would manage the
shelter and the Red Cross volunteers would handle feeding and day-to-day
operations. Since the facility was not
a designated Red Cross shelter, normal shelter rules did not always
apply. The shelter allowed animals, for example.
The volunteers lived with
the storm victims and were visited periodically by a Red Cross disaster mental
health specialist. She provided valuable guidance, particularly on managing
people with mental disabilities. Andy says, “Working with the residents was
initially challenging since only one member of our volunteer group had past
shelter experience.” As can happen when people are under stress and housed in
close quarters, there was periodic friction between some of the people there. In
addition to the area residents affected by the storm, there were a number of
transients under the same roof. In order to best accommodate all the different
groups of people, the transients were placed in one area, families in another,
and all of the single men and single women lodged in two other areas. The
Yonkers management team and the visiting nurse were available to answer
questions.
“While there was some
tension at the start and periodic friction, as time went on the volunteers were
able to connect with their charges and become a cohesive family. When it came
time to officially close the shelter there were some residents that actually
didn’t want to leave as we had become very close with them,” says Andy.  Over time Andy and his peers learned to “go
with the flow” and organized a small Halloween event for the residents.
When the team debriefed
their chapter leader after returning home, they were met with some awe. “So,
you pretty much ran the shelter on your own!”
Andy sees future situations as far less daunting given their experience
and success in New York.
Our Volunteer
Profile series offers a weekly look at some of the amazing volunteers who help
drive the American Red Cross mission forward. Approximately 1,700 volunteers in
the region serve as the backbone of our organization. This series is written by
our communications volunteer, Patrick Wilson.