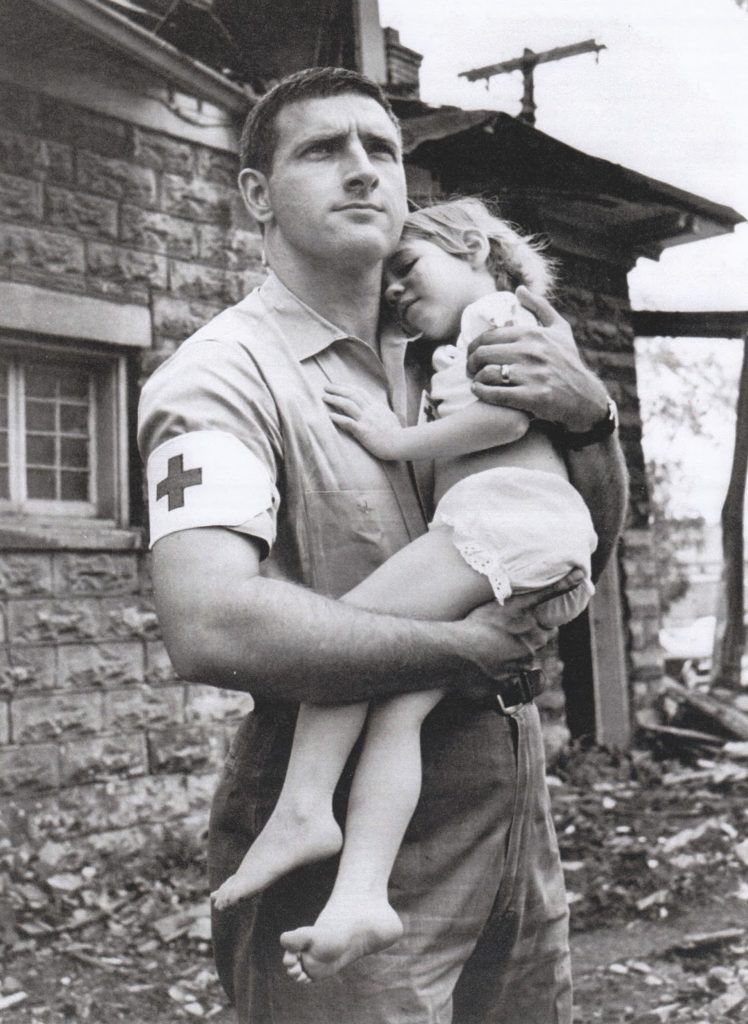 A Hero, according to the Oxford English Dictionary, is defined as “A person who is admired for their courage, outstanding achievements, or noble qualities.” This sounds simple but not just anyone can be called a Hero or is capable of heroic actions. In her book, The Unthinkable, Amanda Ripley explores explanations of heroism. She writes: “A sense of empathy, combines with an identity as someone who helps and takes risks may predispose someone for heroism,” and she notes that “heroes often explain their actions with a statement that [they] literally couldn’t have lived” with themselves ‘…if [they] hadn’t done it.”

On March 24, 2017, a number of people honored during the 20th Annual American Red Cross Heroes Breakfast referred to themselves in much the same way. As they told their own personal stories, all of these local heroes had something in common: a strong sense of altruism, humility and humanity. These are, according to Ripley, powerful qualities that all heroes seem to share no matter their circumstances.

The Southwest Washington and Oregon-area heroes described pulling people from burning and submerged vehicles. They talked about being in exactly the right place at the right time to provide CPR to someone whose heart is stopping and skipping under their very hands. They explained how they mobilized people to evacuate from dangerous buildings in the nick of time. And they talked about the extraordinary reward and value of facilitating the collection of hundreds of units of blood.

The Heroes Breakfast took place during one of the most challenging traffic jams in Vancouver, Washington’s history – in fact, some news outlets called the morning’s traffic jam downright “epic” – but that didn’t stop the audience from showing up, tearing up and making dollar donations. 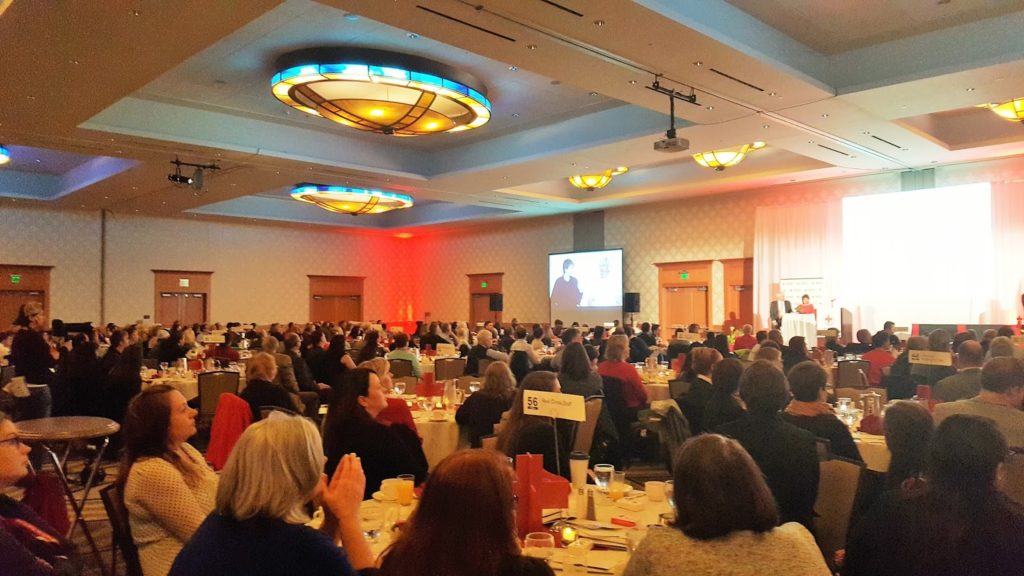 “This is my third Heroes event, and it’s the best by far,” said Jennifer Van Houten, Vice Chair for the Red Cross Cascades Region Board of Directors and Senior Vice President for U.S. Bank. “As a board member, I’ve served the Red Cross mission through various fundraising and in-field activities, but I have never directly saved someone’s life. Listening to these amazing stories reminds me – and I hope anyone else who encounters them – that it’s critical to find personal courage and do what’s necessary in times of great need. I hope these stories inspire people to support organizations with lifesaving missions like the Red Cross.”
Van Houten says there are many ways people can pay tribute to Heroes and the people who need them. They can give money, time, talent and blood to the American Red Cross. They can support disaster response opportunities. They can honor and give back to military members, veterans and their families, and they can take training such as CPR and First Aid to prepare for health and safety emergencies.
The following Hero stories pay tribute to a group of people who went to extraordinary measures to save lives. They are also an apt tribute to the American Red Cross, an organization that celebrates a 100 year anniversary in 2017. Listen to what these heroes have to say – and bring plenty of Kleenex. – By Aili Jokela


Blood Donation Hero
Cody Hermeling was honored as a Blood Donation Hero. His story involves a stunning car crash in which he was left with severe head trauma, numerous fractures and a ruptured spleen. Before the accident, Cody was an active young man. Today, he is blind, working on regaining his physical fitness and – with the help of his mother – intent on giving back more blood through blood donation drives than he took from area hospitals after his accident. Cody says he is the “least heroic” among those honored because he was saved with help from blood donations – a beneficiary of the kindness of strangers. Kathleen Boniface, his mother, and Cody both believe that giving blood is the easiest thing a person can do to save lives. Cody says a “needle feels like a pinch,” and Kathleen says, “It only takes a half an hour of your time to save someone else.” 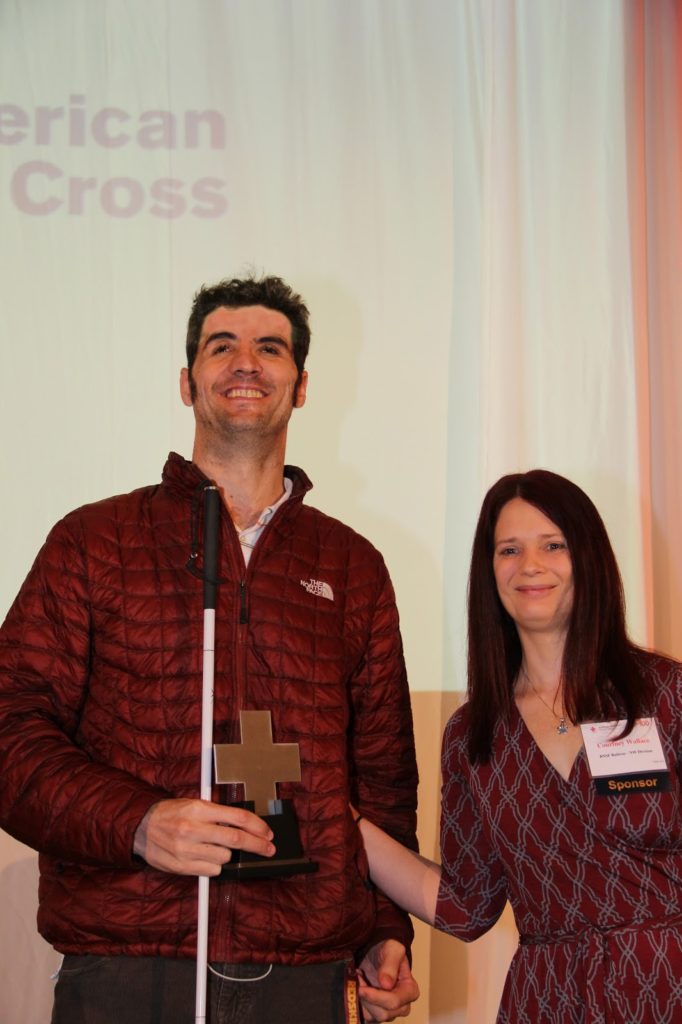 Medical/CPR Rescue Heroes
Colin Helt was present at the Heroes’ Breakfast to publically thank two men who saved his life when his heart stopped during football training. Joe Reed and Albin Boyse sprinted to Helt’s aid and worked together to help save the young man’s life through CPR. Boyse noted that all of the stories at the Heroes breakfast “are very emotional.” As for this story, Helt says to Reed and Boyse, “What you two did for me means the world to me, and from the bottom of my heart, I love you guys. 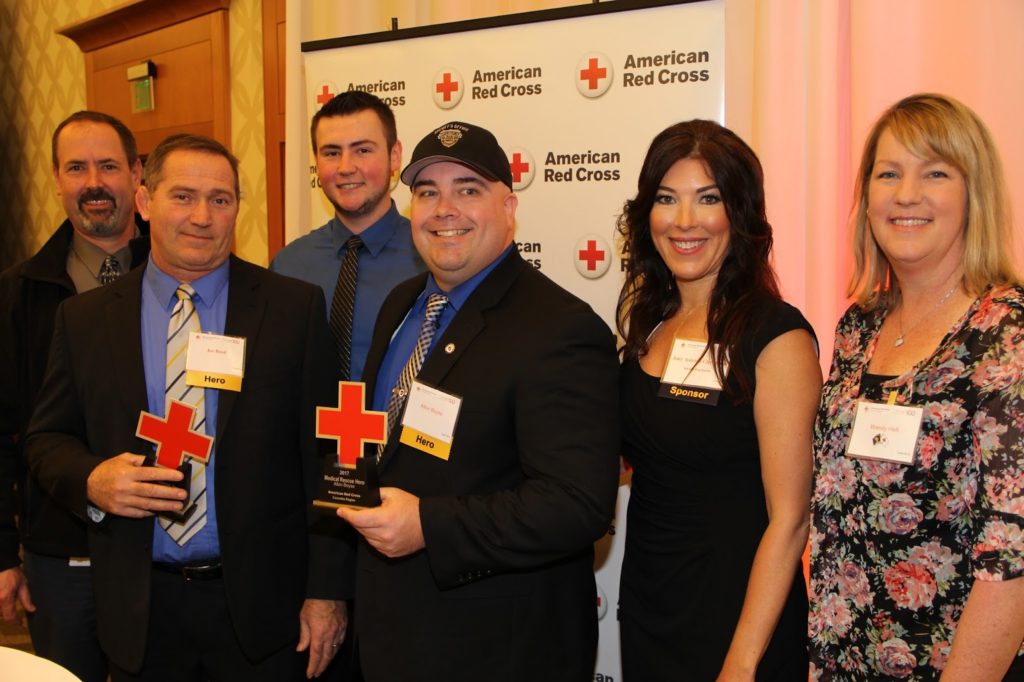 Adult Good Samaritans
David Della Paolera, Hiedi Poulson and Kim Detter told a hair-raising story about pulling a man from a burning vehicle last summer on Southwest Washington’s Highway 503. Poulson explained, “I had a lot of training, a god given gift. I am not a hero. I did what I was supposed to do.” Detter, who helped with medical triage, said, “I didn’t even think about it. I am glad I had my medic bag in the car.” And Della Paolera described how he battled flames to pull the man from his vehicle moments before it exploded. 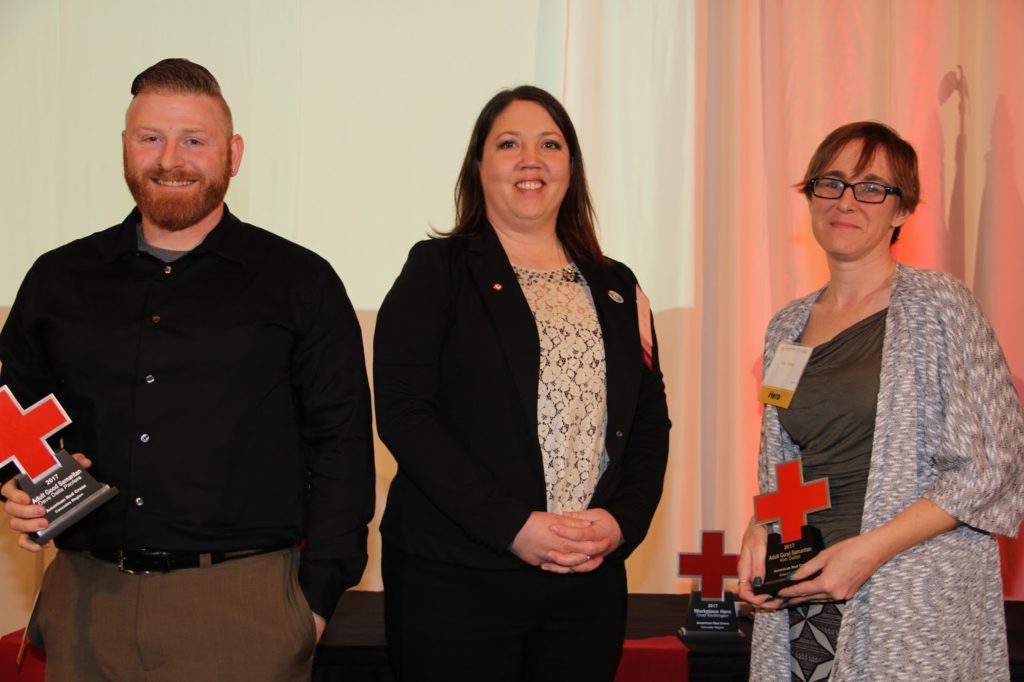 Military Hero
Rex Donaldson, a United States Army veteran, alerted and pulled people from a burning apartment building. He instinctively ran up to the building and literally caught a man, who jumped from a second story window, in his arms. Rex doesn’t think of himself as a hero either. He did what he was trained to do. “A hero to me is someone who died in Iraq,” he says. 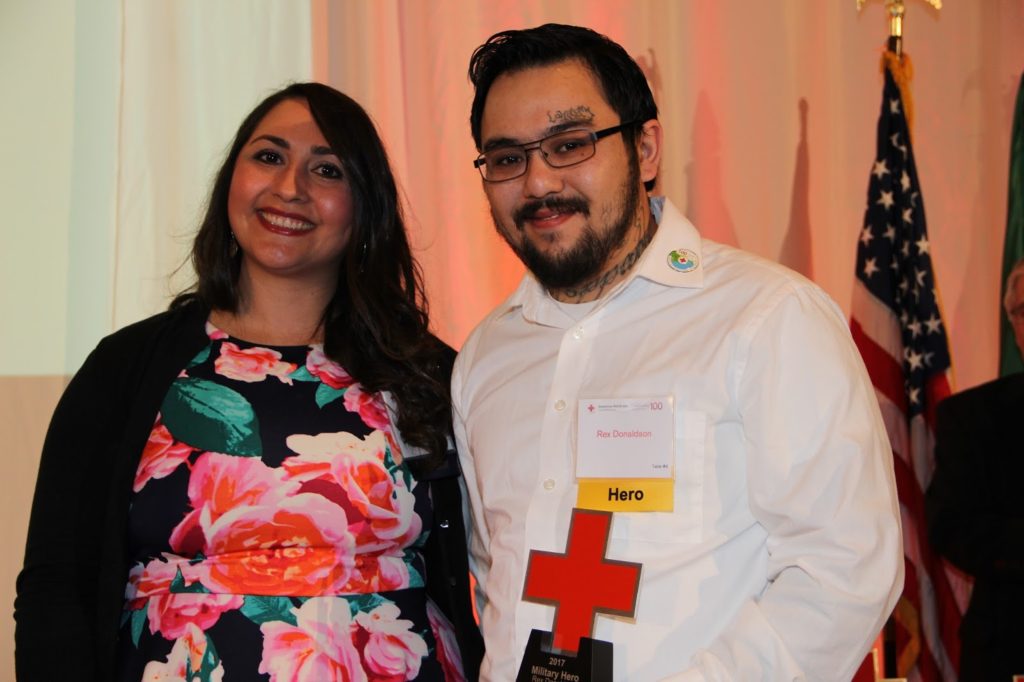 Water Rescue Hero
Dan Windon was driving on a very dark remote country road in Camas, Washington, when he came across something that caught his eye. It turned out to be a submerged car. Windon used a tow hitch to break the vehicle’s back window and was shocked when a hand emerged from an opening in the broken glass. Windon pulled the driver to safety moments before the automobile became completely submerged in the floodwaters. “It was unbelievable timing. It just wasn’t his time,” said Windon. 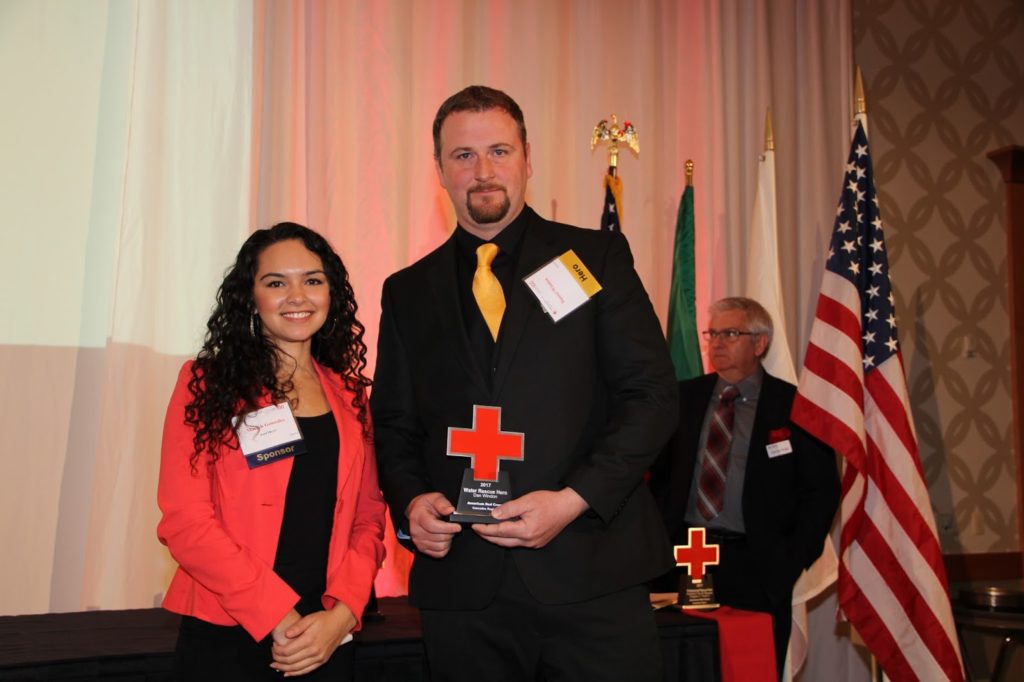 Workplace Heroes
In July 2016, Chad Worthington was sitting in the front seat of a vehicle at a construction site where he was working. His vehicle was struck by another automobile, but thanks to the sturdy structure of his work vehicle, he wasn’t hurt. The same couldn’t be said for the driver of the van that hit him, or the driver’s child. Worthington and Daniel Salazar pulled the family to safety moments before the van was engulfed in flames. “There is no way that I could leave a kid in a burning car,” says Salazar – even though it was clear an explosion was imminent. “I wouldn’t be able to live with myself.” 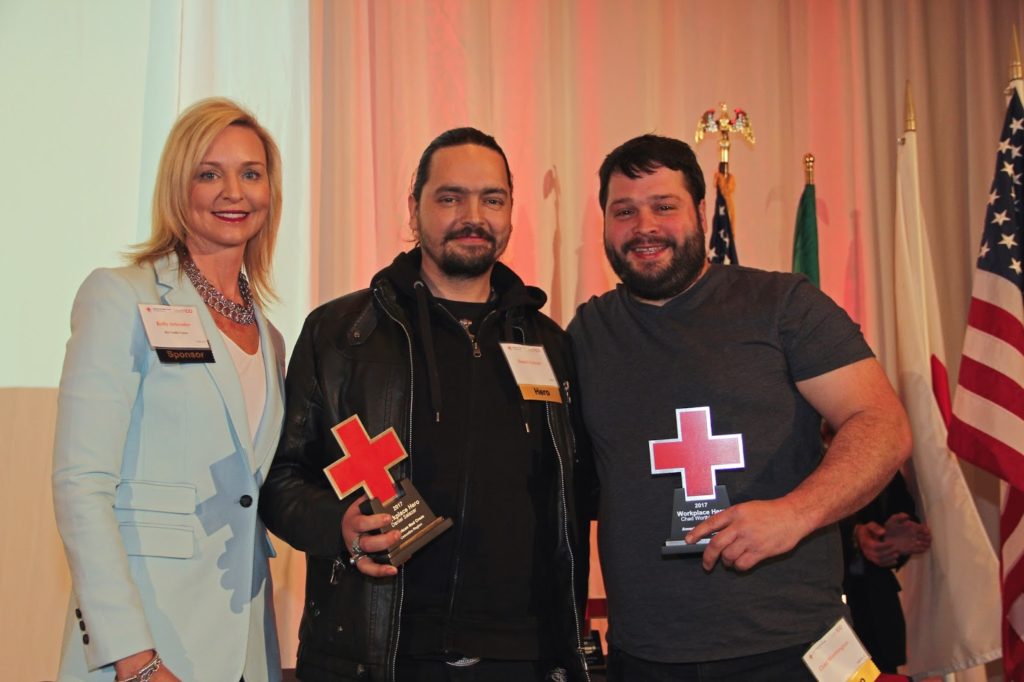 Youth Good Samaritan
Brandon Miller’s instinct told him to ride with his grandfather the day his grandfather had a heart attack while driving. Miller noticed that the truck they were riding in was veering and speeding up and his grandfather, at the same time, was pale and unconscious. Brandon safely steered and slowed the vehicle from the passenger seat. He brought his grandfather’s truck to a halt and performed CPR until additional help could arrive. “I don’t need an award because [my grandfather] is still alive and that’s all I need right now,” he says. 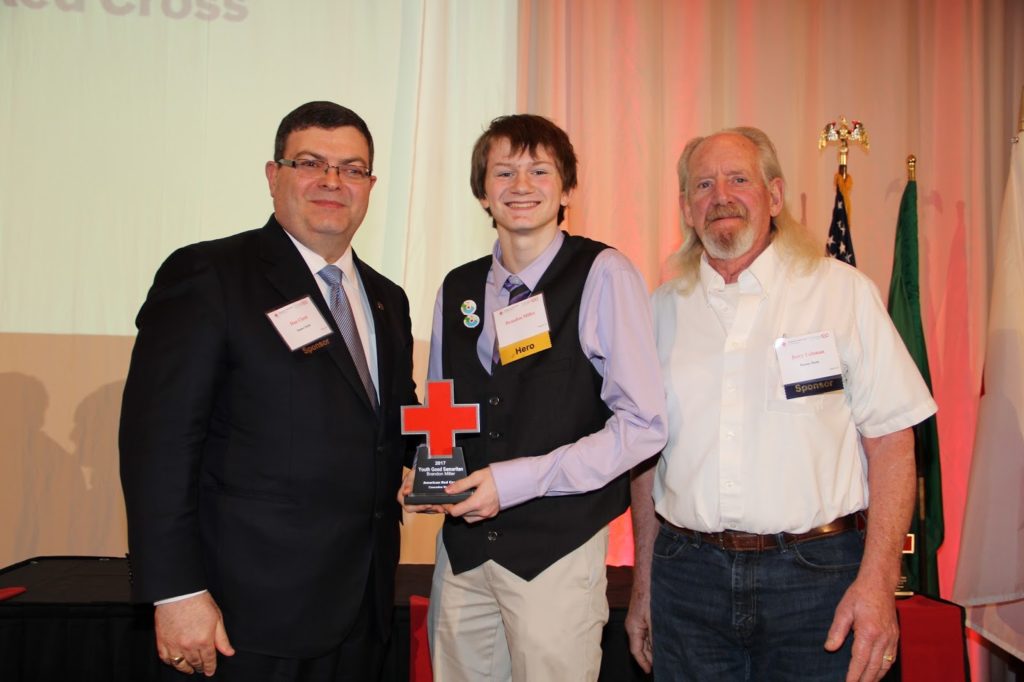 Professional Rescue Heroes
In October 2016, Portland Fire and Rescue responded to a report of a natural gas leak in a densely populated area of Northwest Portland. The gas leak turned out to be very dangerous, requiring speed and skill to safely evacuate people in the area. Full of accumulated gas, the building exploded. Portland Fire and Rescue’s Battalion Chief of District 4, Jamie Klum, said, “I just couldn’t believe it. There were no fatalities.” As for the award, he says: “It’s an honor to be recognized, but that’s what we do. We put on our boots and gear. The goal is to come home safe. And it’s the team who completes the picture.” 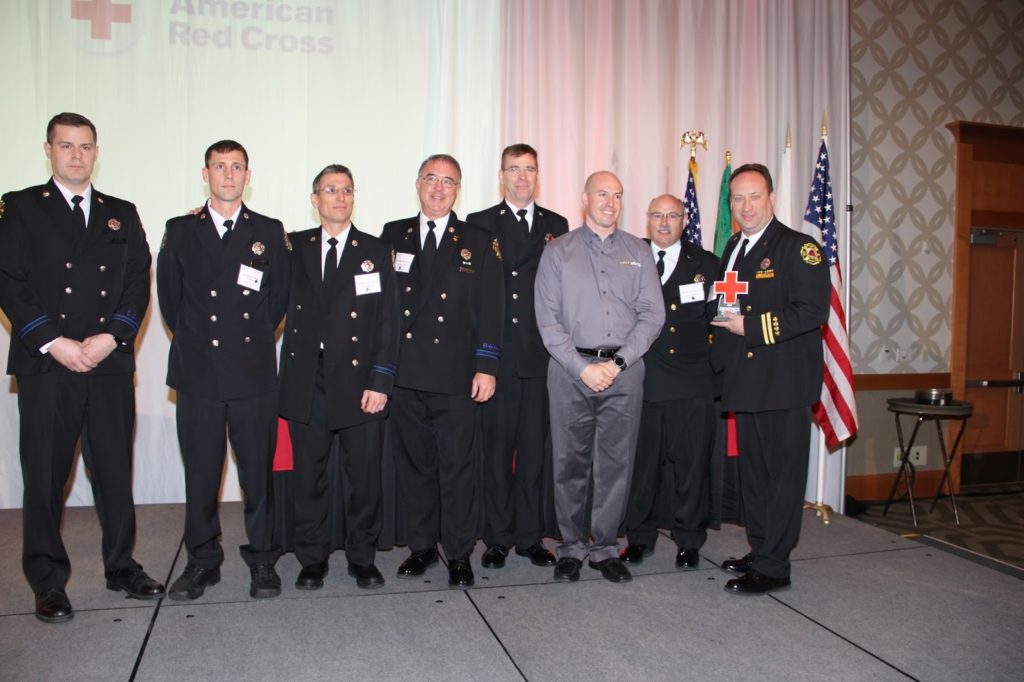