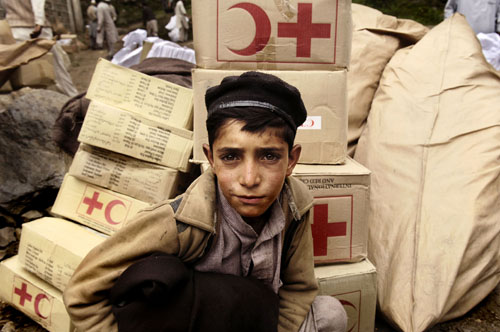 Happy 180th birthday, Henry Dunant. You are one of the main reasons the Red Cross is here. After you witnessed the brutality of war at the Battle of Solferino you wrote a book about it, and you put forth the idea that there should be some sort of neutral organization should exist to provide care to wounded soldiers. That helped inspire both the founding of the International Committee of the Red Cross and the Geneva Conventions (both of which you were also directly involved with).
Today I attended a class about International Humanitarian Law, and I saw a lot of footage of the work you helped inspire. It was hard for me to keep from getting teary-eyed just watching the images of war. I can’t imagine what it was like for you to witness it first hand. I think you would be pleased, though, to see how International Humanitarian Law has developed. Three more Geneva Conventions have been instituted since you passed away in 1910. The one you helped inspire dealt with the treatment of wounded soldiers in war time, but the new ones also address treatment of POWs and civilians.
We watched a video that the ICRC developed to show to armed forces in the former Yugoslavia. The narrator used phrases like “True fighters show respect and compassion for their opponents.” It was moving for me to see, even the littlest bit, through the eyes of a soldier. I think that you would be proud of those videos, Henry.
I also think you would be proud of how the ICRC, IFRC, and Red Cross societies are rallying support for the recent cyclone in Myanmar.
We honor you today, Henry, and the work you helped inspire. It’s hard for me to say “happy” World Red Cross Red Crescent Day when such a devastating disaster has just happened. But you know what I mean.