Yesterday Hillary and I went to this crazy airport drill at the Portland Airport. Seriously, it was crazy. They’re required to have these drills once every three years, and they cost a bajillion dollars (they wouldn’t disclose the exact figure, so I was forced to guestimate).

The drill is: What do we do when an airplane crashes near the airport? The organizations involved would be the Port of Portland, City of Portland, Federal Government, State Government, County Government, the Red Cross, local hospitals, and the airlines concerned (Horizon, in this case).
They have an airstrip and field set aside for the sole purpose of drills like this so they won’t interrupt the normal flow of air traffic. They used TriMet buses to simulate the aircraft’s fuselage, made up a bunch of volunteers to have gnarly, realistic looking injuires with specific instructions on how to act to test the emergency responders, strew luggage and clothing over hundreds of feet of airstrip, used smoke machines to replicate the environment, and ripped apart an out-of-service bus to practice how they’d have to rip apart an airplane in a real emergency. 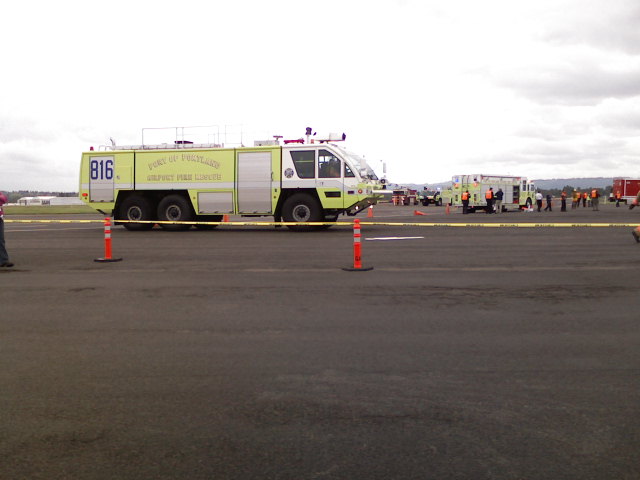 They even had a practice fuselage that they engulfed in flames and had the firepeople practice putting out a real fire. But these weren’t normal fire trucks. They looked like the machines you’d use in urban warfare: huge all-terrain tires, wide front windows to seat 3-4 people across the front, turret mounted nozzels on the front and top of the trucks that were controlled by joysticks, and they each carried hundreds of gallons of water, potassium biocarbonate, and condensed foam since on airport runways they might not have a nearby water system to plug into. 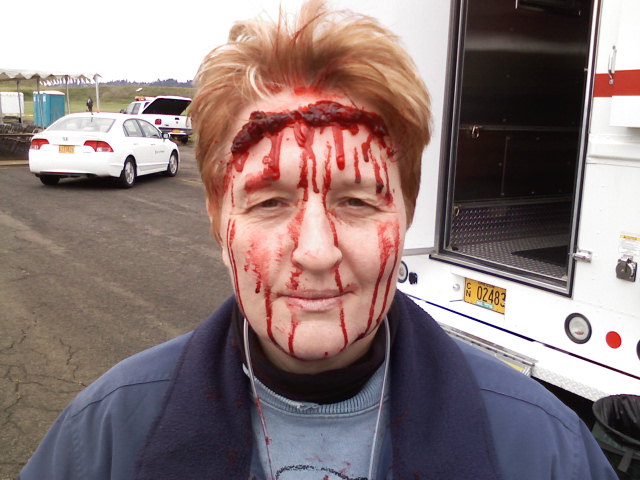 There’s a lot more to tell about this story, and I think I’ll write a zine about it. Meanwhile, here’s one or two of the pictures. One of them is the urban warfare fire truck and the other is one of the made-up victims.
Oh, by the way, the drill went well. The Red Cross’ role in a disaster like this one would be to provide mental health personnel to help the family and friends who would be waiting at the airport to pick up there loved ones. Managing the grieving is a large task, and the scenario the airport used was not kind to the passengers: 92 died, 33 were transported to the hospital, and three were unaccounted for.