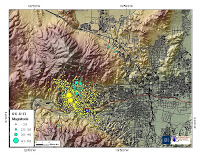 Saturday afternoon and I’m catching up on work. Ugh. But I did want to blog an interesting e-mail before it’s old news…

Tom Traver, another one of our amazing public affairs volunteers (who are not all named Tom, by the way), forwarded me an e-mail from Lt. Col. Cynthia Ryan, a public affairs advisor with the US Air Force. Cynthia lives in Nevada, and though I’ve been distracted lately with flooding and wildfires, there have also been thousands of earthquakes in Nevada.

So, without further ado, here’s an “on the ground” perspective from Cynthia:

Yes, you could say that there has been a swarm [of earthquakes]…over 5,000, last time I checked.

A ‘truck hit the house,’ then a horrible, creepy ultra low frequency crack, then a series of very low frequency snapping sounds…like giant redwoods being snapped in half.

We have a lot of friends that live right in and around Mogul (remember, this is right in the Reno city limits…not miles out of town) that have left town to get away from the constant shaking and fear; slept in tents in the backyard being too afraid to sleep in the house at night; had everything dumped from kitchen cabinets and destroyed, pictures thrown off walls, furniture overturned…on a day in, day out basis since the end of February. It slowed down, but according to a friend in Mogul who called last night [June 8] it’s starting back up again.

I’m waiting for the quakes to start ‘bothering’ me now. I couldn’t figure out what was going on but was so sick to my stomach and had such terrible vertigo that I went to the doctor. They did all kinds of tests and found nothing wrong. Then a friend suggested that I might have an extremely sensitive vestibular system. That started a chain of thought, so I went to the seismo lab site and the frequency and intensisty meshed perfectly with my symptoms. When I would leave town the symptoms stopped cold, immediately. The day of the 4.7 I literally couldn’t get our of bed…then wham. I started feeling better over the next couple days. A couple little queasy woozy things since.

As a skeptic, wanting everything evidence based/peer reviewed etc , I’m not prepared to concede that I’m a natural earthquake predictor, but lots of friends are asking me to call if I start feeling bad again so they can get out of the house in time.

Pretty incredible, right? If Cynthia lived in Portland, I’d want her to alert me as well.

It goes without saying that if you’re ever in an earthquake, you should know what to do. And, if you live in “earthquake country” — which definitely includes those of us in Oregon — here’s how you can get prepared.