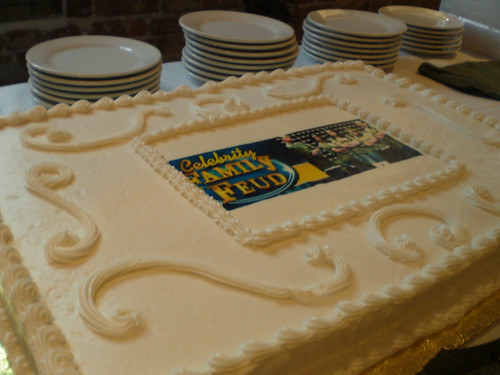 Last night our celebrity cabinet member, Raven-Symoné, appeared on the popular (and I have to say totally awesome) game show, Family Feud. She and her family all dressed up in vintage style Red Cross t-shirts, played their hearts out and won!… Of course pledging the winnings to the Red Cross. (Raven has been a celebrity cabinet member for over two years now, and she’s helped us out in the past with disaster relief efforts and advocating for the importance of babysitter’s training. Rock on, Raven!)

To celebrate Raven’s game show appearance, a group of Red Crossers at national headquarters (where I am this week, if you missed the news) got together at a local restaurant and watched the show. They even ordered one of those crazy cakes that has a photo on it! It was a fun event. I had a great time watching the show and getting to know a lot of fellow Red Crossers. I met some folks in the Service to Armed Forces family assistance program, which I will blog all about later, I promise. (And that’s not the official name of the program, but I’m way too tired right now to think of the official name.) And one of them was even from Eric’s old chapter in Denver! It’s a small, small Red Cross world.

(My apologies if you now have that song stuck in your head.)

One thought on “Survey Says… That’s So Raven!”