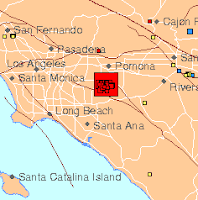 From early reports it looks like it was big enough to shake people up, but not big enough to cause major damage. Apparently it affected cell phone coverage though. Is there a better reminder to register with www.safeandwell.org ?
My contacts in L.A. reported that their buildings swayed for several minutes. One friend’s report from the ground:
I was standing against a wall, and after everyone thought it was over, I was like, “Dudes, the walls are still moving.” The angle where the floor meets the wall was changing. That’s how I could tell.
So there’s a good earthquake tip for you. Be sure the quake is over before you move away from your Drop, Cover, Hold position. Watching the angle where the floor meets the wall could be a better indicator than relying on your sense of motion when you’re shaken. See here for more earthquake tips.
P.S.  I have to give some praise to Twitter as an emergency resource. I found out about the quake just a few minutes after it happened because I got alerts on Twitter. If you want to stay similarly informed, you might want to sign up for an account and follow us, and the National American Red Cross.
(Photo via USGS.gov )