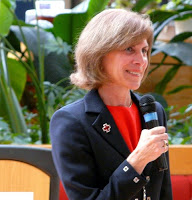 I got an e-mail a while back that I’ve been meaning to mention on the blog.

In it, GMcG (my new abbreviation for Red Cross CEO Gail McGovern) laid out her six top priorities for the organization, developed after listening to Red Crossers from chapters, Biomedical Services units, Service to the Armed Forces stations and national headquarters during her first eight weeks on the job.

I’m not going to share them all with you, but did want to call your attention to #4 — Revitalize Our Brand.

As GMcG said: “I think we can become a 21st century brand that builds upon our beautiful 127-year mission and history. This means demonstrating the relevance of the Red Cross today, and making the brand ‘cool’ by using new media to make everyone, particularly younger people, wants to be a part of it. We can leverage the grassroots nature of our brand by sharing the personal experiences people have with their Red Cross. As my stepson Justin McGovern, an avid fan of the Red Cross and an Air Force sergeant just back from Iraq, told me: ‘Everyone in the country should help the Red Cross, so the Red Cross can help everyone in the country.’ I’ve taken Justin’s words to heart, and I’ve embraced them as a lofty, ambitious goal.”

As you know, we’re already big fans of new media here at the Oregon Trail Chapter, so we heartily approve of GMcG’s endorsement of these tools. We also agree with her push to make the Red Cross cool, though certainly that will take more than just a blog or Flickr or Twitter.

Also, I can’t give away any secrets, but let’s just say there’s a brand-new button in the works that will definitely do just that…stay tuned!