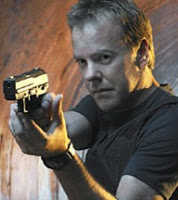 Remember the beginning of the episode when Jack Bauer is seated in front of a senate committee, talking about human rights violations committed by his former employer — CTU?

Jack doesn’t seem particularly remorseful about the whole thing. In fact, he claims he only did what was necessary to prevent terrorists from killing innocent people.

But is that an excuse for violating the Geneva Conventions that we at the Red Cross have a mandate to teach? I think not. As much as I’m a fan of Jack Bauer, I think he might need a refresher course on International Humanitarian Law. Good thing we’ll be offering one in a few weeks…details coming soon!

I will say that there have been very real concerns about the impact that torture on the show has on real life. If you’re interested in reading more about this topic — including how Guantánamo lawyers charged with devising interrogation techniques were said to be inspired by the exploits of Jack Bauer — check these articles out:

Whatever It Takes: The politics of the man behind “24.”, The New Yorker

US military tells Jack Bauer: Cut out the torture scenes … or else!, The Independent