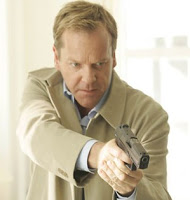 I’ll admit it — I’ve been a loyal watcher of 24 since the very first season when Kim was kidnapped after partying with those boys. Yeah, that’s right; the amnesia and mountain lion season. And even after all that, I still have watched it ever since.

Last year I was about to give up and I kind of thought that I might just let this year go entirely…but like millions of others, I tuned in last night, only to see what could be a real disaster unfold.

If I understood all the jargon correctly, the CIP module could bring down the government’s firewalls…for everything. Air traffic control, the power grid, the water system, etc… As they explained, huge swathes of the country could be without power, leading to riots and civil unrest. Water wouldn’t be drinkable (no “potable watable,” as a couple of my Red Cross friends would say), leading to all sorts of disease. And, as we saw last night, there could be plane crashes all over the place.

So what would this mean for the Red Cross? Well, we’d be providing emotional support to families of plane crash victims, we’d be making sure people knew what to do when the power’s out and reminding people that they should have bought a WaterBOB (or at least had 1 gallon of water each day per family member), just in case.

We’d also be sharing these tips about terrorism, which — bottom line — is exactly what 24 is about.

Maybe one day Exec. Producer Keifer Sutherland will see fit to include the Red Cross in 24’s disaster response vs. just those consistently crooked government agencies. You listening, Keifer?