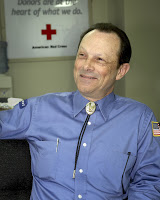 As we celebrate March as Red Cross Month, we are proud to introduce Bob Hawley as part of our Red Cross family!
Volunteer blood donor Bob Hawley, 62 of Mt. Angel, Oregon has donated more than 26 gallons of blood over the years. Bob’s blood donation goal is to have the highest number of donations at Salem’s Red Cross Donor Center by the time he quits donating (in the distant future).
In 2006 that goal was shattered when he was diagnosed with prostate cancer, which made him ineligible to donate blood. Bob opted to temporarily move to Loma Linda, CA for treatment, beat his cancer and is back to donating blood every 8 weeks without fail.
Bob is a Purple Heart recipient who served two tours in Vietnam. During his service with the airborne he jumped out of many planes, but always dreamed of being the pilot. Since Bob won his battle with cancer, he was motivated to follow that dream by taking flying lessons. Recently Bob was able to make his first solo flight out of the airport in Salem. He expects to receive his pilot’s license later this year.
The Rev. Dr. Martin Luther King is credited with saying, “The ultimate measure of a man is not where he stands in moments of comfort and convenience, but where he stands in times of challenge and controversy.” Bob’s dedication to helping others in times of challenge, shows how a person can meet life’s challenges head on and inspire others.
Story by Margaret Sanner – Red Cross Willamette Chapter
Photo by American Red Cross volunteer William Enos.