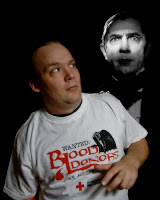 Portland, Ore.—Count Vladimir von Dracula, the centuries-old Romanian nobleman who sustains his existence by feeding on the blood of the living, was found today asleep in a Red Cross blood storage refrigerator.

A Red Cross Blood Components Specialist discovered the Count hanging upside down with his pale, gaunt arms folded across his chest.
“As you can imagine, I was pretty shocked to find him here” said the Red Cross employee, “but once I had the chance to talk to the emaciated, pointy-toothed corpse, I realized he seemed uncharacteristically tranquil and sort of, well, depressed.”
As one would not expect, Dracula’s decision to bunk in a bed made of blood bags was not an act of pernicious diablerie. The Count told Red Cross Communications Manager Daphne Mathew that he came to Portland because he was evicted from his creepy, crumbling castle in the Carpathian Mountains; a victim of the subprime lending disaster, Dracula was unable to pay his mortgage.
“I didn’t have anywhere to go, so I turned into a bat and flew to Portland,” said the haggard cadaver while shielding his face from a lethal ray of sunlight.
However, to Dracula’s surprise, houses in the city of roses were even less affordable than houses in Transylvania: “I thought I would be able to find a home here, but everything haunted or even semi-scary was out of my price range.”
Despite help from lenders, home foreclosure rates are still on the rise across the nation. Nearly 1.4 million homes have been lost since the inception of the mortgage meltdown in July of 2007.
Unfortunately for Dracula, he will not be allowed to prolong his nightmarish living death on Red Cross premises, a decision made by CEO Steve Stegeman after the undead count bit him in the jugular, extracting several pints of blood.