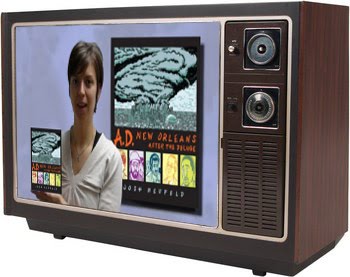 In tribute to both the fourth anniversary of Hurricane Katrina and today’s cancellation of Reading Rainbow (one of the best children’s TV shows in history), I present the following book recommendation:

[Read in the nervous, awkwardly rehearsed voice I would have had if I’d been one of the Rainbow Readers…]
Hi. My name is Robin. And I would like to tell you about a great book I just read. It is called A.D.: New Orleans After The Deluge. Yes, it is a graphic novel, but don’t be fooled – it’s not just a silly comic book. A.D. feels more like a documentary film – reenacting the moving real life stories of Katrina survivors. The art itself is incredible and tells the story in a way that words alone could not.
You can read the first few chapters online here. I guarantee you’ll be hooked in just a few pages. And heads up, Portlanders! If you want a signed copy of your own, author Josh Neufeld is coming to Wordstock this October.
(Yes, that is my very hasty photoshop of me had I been on Reading Rainbow.)

One thought on “My Tribute To Reading Rainbow”