With the news of damage from the 8.8 magnitude Chilean Earthquake still coming in, many news outlets (both locally and nationally) are bringing up the point that the same thing could happen here. In fact, the Oregon/Washington area is the most tectonically similar to Chile.

Both coasts lay on top of a subduction zone (Oregon’s is pictured), in which one plate is pushed below another. In our case, the Juan de Fuca plate is being pushed below the North American plate. This has two noticable impacts on the landscape by creating the coast range of smaller mountains from crust being pushed up, and the second impact of inland deep stress ‘sweating’ with lighter magma coming to the surface as the larger Cascades range. 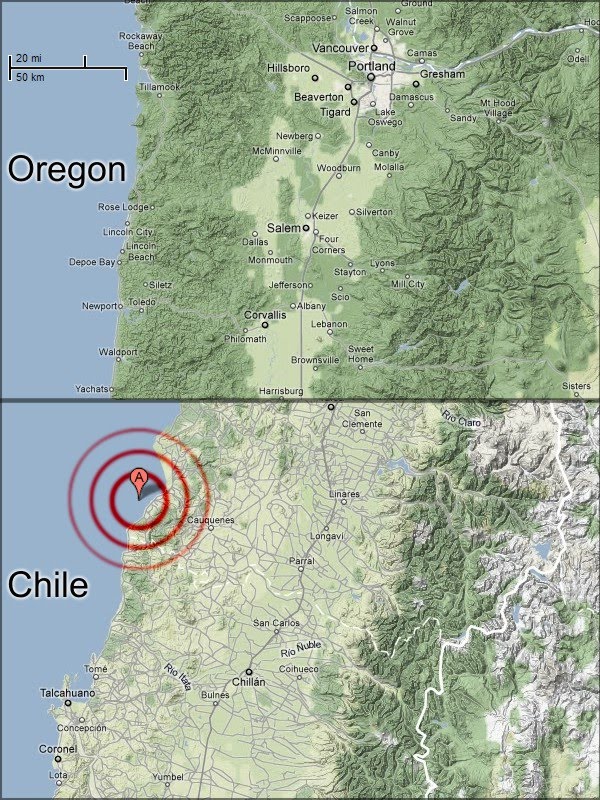 For Chile, replace the names ‘Juan de Fuca’ with ‘Nazca’ and ‘North American’ with ‘South America’, and you can see that the Andes mountains have much in common with our Cascades range. To the right I have created a terrain comparison using the same scale and with the Chilean earthquake center noted. Geologists predict that around the year 1700, the Pacific Northwest had a 9.0 magnitude earthquake which was primarily documented in Japan, that received a devestating tsunami as a result. A 9.0 earthquake is roughly twice as powerful as the quake that struck Chile, and 1,000 times as powerful as the one that hit Haiti. It is worth note that the Chilean subduction zone is moving at roughly four times the rate, however our area is due to have one of these intense earthquakes sometime in the near future.

This is another great reminder to prepare. The Oregon Red Cross has resources online for Earthquake and Tsunami preperation. Further, you can donate blood to help the area maintain a healthy blood supply to prepare for the uncertain future.

The Red Cross has already pledged an initial $50,000 towards relief for the earthquake.

Images:
Subduction diagram from the Oregon State capital 150 Million Years in the Making exhibit (for which I served on the creative team for)
Map created using assets from Google Maps