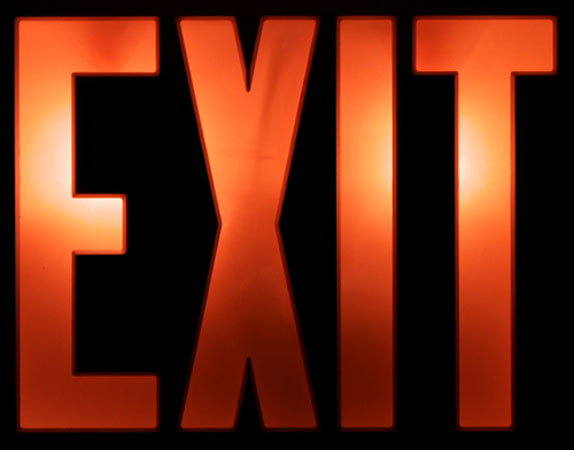 I can imagine controversy over evacuation policy or emergency preparedness funding…but it took me a moment to realize that our most basic aid in the event of a disaster, the red illuminated “EXIT” sign, might be cause for debate.

Slate Magazine and journalist Julia Turner bring forward the notion that, yes, perhaps that iconic “EXIT” sign is due for a change. The article, titled “The Big Red Word vs. the Little Green Man” is unfortunately not about a change towards a Yoda figure on exit signs, but instead, a running man design outlined in green.

The “running man” design, as it’s been called, has one particular advantage over the commonly used “EXIT” design: no words. Just like many traffic signs, this is a crucial consideration for those without an English-language background. Speaking of traffic, Turner argues that the green background is also associated with “go” while our bold red text is often linked to “stop” or “danger.”

How should we properly address this dispute? My opinion: as a fan of the democratic process, I think we need campaigns to represent the two options: the “EXIT” sign group and the Running Man group. The best part of this idea? …The campaign theme songs! The Running Man group would clearly use the timeless Bon Jovi track “Runaway.” Especially with all his Red Cross action lately, this makes complete sense.

For the “EXIT” sign group, I’d have to kick it back to the ’90s because you know that Ace of Base “saw the sign” with their one-hit wonder “The Sign.” If Swedish musicians Ace of Base are content with the current English “EXIT” sign, who can really complain? That is what the song’s about…right?