There are some easy ways to demonstrate how volcanoes and earthquakes work! Last year I was fortunate to work with Oregon State’s Robert Lillie, a Professor of Geology and Public Interpretation. To help the public understand how earthquakes and volcanoes are created with plate tectonics, he developed some simple visuals using snack foods. The first part in this two part series will discuss plate boundaries using double-stuffed Oreo cookies. 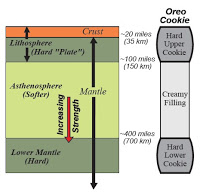 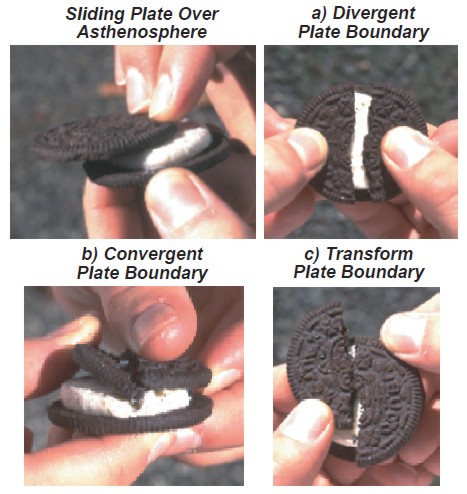 a) Divergent plate boundary, push down on the two broken cookie halves and slide them apart. Notice that the creamy filling between the two broken “plates” may tend to flow upward, similar to the rising, decompression, and partial melting of hot asthenosphere at mid-ocean ridges and continental rift zones. (Ex: Iceland)

b) Convergent plate boundary, push one cookie piece beneath the other. This is the only situation where the cold, brittle lithosphere extends to great depths, and hence the only place where deep earthquakes occur. The very largest earthquakes are at subduction zones where two plates get stuck together for centuries, then suddenly let go. (Ex: Western Oregon)

Additionally, a Hotspot can be simulated with the demonstration in the upper left photo. Imagine if a piece of hot, glowing coal were embedded in the creamy filling – a chain of “volcanoes” would be burned into the overriding cookie. (Ex: The Hawaiian Islands, Yellowstone)