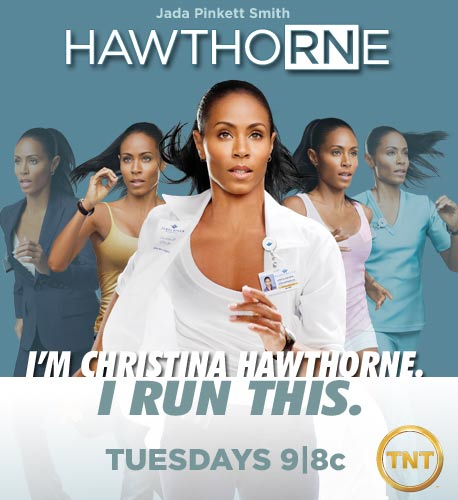 You know what I don’t do during the summer? Watch TV.

Even though I’m the least sporty girl ever (the term “glamping” was basically coined for me), I attempt to get out in the sunshine and play bocce, ride bikes and even kayak. Honest.

But now it looks like I might have to give up the Vitamin D for an hour or so each week.

That’s because there’s this show on TNT called HawthoRNe. This is cool because:

1. It’s about nurses and I once worked in a hospital. I know for a fact that nurses are awesome people and, as such, very entertaining.

3. Even though HawthoRNe is in its second season, they are the FIRST TV SHOW EVER to raise money for a charity through the Facebook Causes app.

Sure, #3 is pretty cool on its own, but even cooler when you know that…

…for every person who becomes a fan, they’ll give $1 to the American Red Cross.

Awesome, no? Not to mention the fact that becoming a fan takes up about one second and does not in any way keep you from getting that farmer’s tan that you’ve been striving for.

So do it. And watch the show. Giving up a teensy bit of Vitamin D is totally worth it.