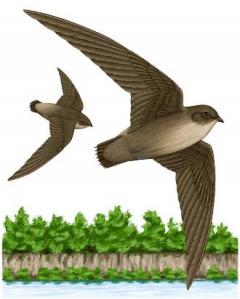 “That’s so Portland!” I’ve been it told so many times the exact criteria is indiscernible. Since I moved from northern Indiana (Mishawaka to be exact) on August 19th, I’ve been trying to figure out what makes something “so Portland.”

I was invited to crash a dinner party with a fellow AmeriCorps member’s family last weekend. Among the hilarious and fascinating topics of conversation that came up was the Swifts that roost in the smokestack of Chapman School, described to me as being very “Portland”. They told me a charming history and tradition of the students and staff sacrificing; the preservation efforts; the hundreds of picnickers, and yes, the thousands of Swifts. What made them descriptive of the city?

I took it for granted and followed the flow of conversation, but intended to heed the admonishment that I had “to go see it before the end of the month.” Two days later I was surprised to find that an unexpected Red Cross outreach activity brought me to Chapman School. Just after the event began I slipped away from the information table and went to see this much foretold Portlandesque delight.

I enjoyed the few moments I could take in the activity and returned to my duties, confused. I know so many people back in Indiana who would think this occurrence fantastic. This isn’t so unique; it could be happening anywhere. What makes this “so Portland?”

So help me out. Why is this/how is anything “Portland?”
Photo courtesy of Rhapsody in Books Weblog
http://rhapsodyinbooks.wordpress.com/