On April 29, 2010, Provenge, a prostate cancer treatment, was approved by the FDA. This is the first approved treatment that actively stimulates the immune system to fight cancer cells…the Red Cross has and continues to be an integral part of the treatment process.

Prior to approval of Provenge, chemotherapy, radiation and surgery were the only options. As early as seven years ago, the Red Cross began participating in clinical trials with Dendreon (Provenge’s pharmaceutical company). Earlier this year, the Red Cross signed a contract with Dendreon to provide mononuclear cell collection services for Provenge.
“This service allows the Red Cross to explore cutting-edge technology,” said Pam Spurgin, Director of Cellular and Clinical Services in the region. Pam is responsible for initiating this program in the region and assisting with set-up of the program nationally. 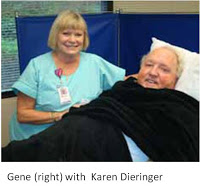 In June 2010, the region’s first patients began apheresis at the Clark County Donor Center, in Vancouver, Washington. There are multiple collection sites throughout the division. Automated Collections RN Karen Dieringer described the center as “just perfect” for the space and privacy needed for the collection process. During the roughly three-hour procedure, mononuclear cells are withdrawn from the patient while all other blood components are returned.

“Chemotherapy would knock me down for weeks; I was fatigued and couldn’t taste anything,” said Ralph, a Provenge patient. “Now, the fatigue I get comes from more activity, because I’m ready to work in the garage after only a day of rest.”

Another patient, Gene, said this option has allowed him to retain his regular diet and lifestyle. Gene and Ralph both remain actively involved in their respective careers – Ralph does contract work as a design drafter and Gene is the president of Carr Auto, a northwest dealership.

Beyond their passion for work, both described travel as a central interest. Ralph is planning a transcontinental cruise with his partner of 26 years, while Gene describes North Wales as his favorite place in the world.

Spending time with her patients has been life-affirming for Karen. She said these patients “are fighters; they are not willing to lay down on this disease.” Provenge has, in Karen’s words, offered them “new hope.”

Researchers are projecting that Provenge will open the door towards immunotherapy beyond its current state. “This technology lends itself to fighting other types of cancers,” Pam said. “It’s going to get exciting.”