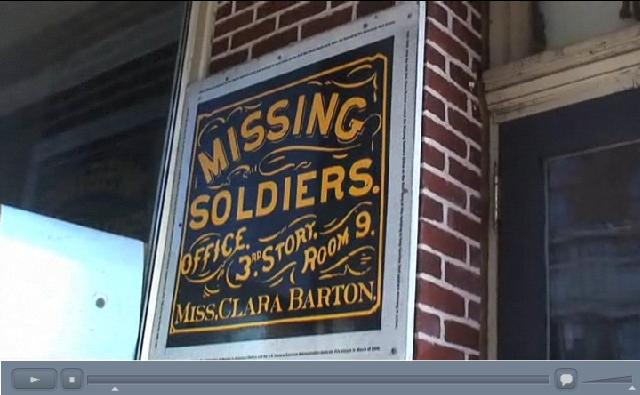 Yes, that’s right. The Clara Barton – founder of the American Red Cross.
They were planning to tear down the old vacant building at 437 1/2 7th St. in Washington, D.C. when the U.S. General Services Administration sent in a carpenter named Richard Lyons to check the place out before demolition.
But when he got there, strange things started to happen. Strange things that led him to discover some of Clara Barton’s artifacts – her office sign, documents, and even some clothing. Turns out this was the office where she ran her missing persons bureau after the Civil War.
I’m totally not making this up! Watch the official video on the GSA.gov! You get to see the office and some of the old artifacts – plus hear Richard tell the spooky story of how he made the discovery.
A Little Background
Knowing that the Civil War would result in thousands of missing persons and separated families, Clara began writing down the names of the soldiers she’d seen wounded or killed on the battlefield. Her plan was to open a government office where people could inquire about missing soldiers and she could publish her lists of names. At first the government didn’t respond to her requests to set up a missing persons bureau… until President Lincoln himself got wind of the idea. He helped Barton convince the War Department to give her a small office (the one Richard discovered!) with a few staff members.

She went on to found the American Red Cross.
P.S. We wrote a short history of Clara Barton’s awesome accomplishments a few years ago.
P.P.S. Thank you, Wendy, for sharing the GSA post!