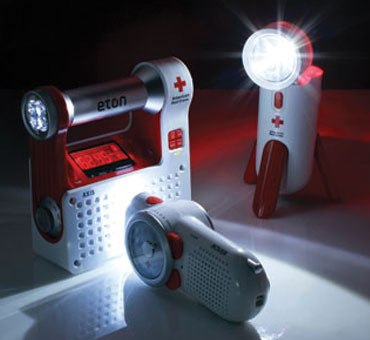 As you may know, I’ve been a fan of Etón hand-crank radios for years (yes, that’s me proudly displaying a 2008 model). And while they’ve always been handy gadgets, they’ve never really been something you’re excited to set out on your shelf… until now.

Why does it matter how they look? Because, ideally, we hope you’re actually using them on a daily basis rather than hiding them away in the closet.

I don’t know about you, but I really want one of the new hand-crank flashlights. I dig how it looks like a miniature rocket – or a close cousin of Eve from the movie Wall-E. Eeeeevaah… or should I say, Eeeeetón.