The Southeast has an extensive history of hurricanes, yet this past weekend we witnessed Irene move farther north and affect cities like New York, Washington D.C., and Boston. Hurricanes form in the Pacific too, and could they travel to Oregon?

While hurricanes are a regular occurrence off the pacific coast of Mexico and around Hawaii, there has been only one recorded tropical storm (a level below ‘hurricane’ status) to have landed on the US west coast, and that was in 1939 at Long Beach, California. The reason for this is from how hurricanes form and are fueled.

Hurricanes (North Atlantic/ Northeast Pacific) and Typhoons (Northwest Pacific) are both ‘Tropical Cyclones’, formed when energy is released by the condensation of moisture in rising air. They are ‘tropical’ because this occurs with warmer water, as seen in the tropics during hurricane season. If strong enough, this activity creates the ‘eye’ at the center which defines a hurricane.

The Northwest isn’t exactly spared though, as we encounter a different type of cyclone. ‘Extra-tropical cyclones’ are formed from temperature contracts higher in the atmosphere, observed as low pressure systems with cold and warm fronts. These cyclones are a defining factor of our everyday weather in the Northwest, and while they are often rather calm in comparison there are exceptions that can create hurricane force winds. 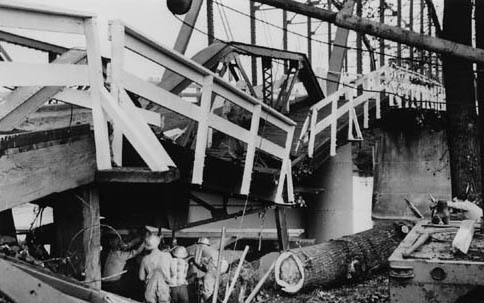 Most notably was the Columbus Day storm of 1962. Typhoon Freda traveled across the pacific, and when it entered colder waters became an Extra-Tropical cyclone. It approached Northern California, where it found ideal conditions to form a low-pressure front that resulted in hurricane force winds and intense rainfall. Similar to Irene, it changed direction north to parallel the coast. This delivered extreme conditions across the Oregon coast, until it started to downgrade around Astoria. Power and monitors were knocked out in many areas making it difficult to know the true winds the coast received, however some believe winds of over 170 mph were observed. In the valley, the Morrison Bridge in downtown Portland reported wind gusts up to 116 miles per hour.

It is still important to be prepared for hurricane force winds, even if we don’t have hurricanes. As such, we keep general hurricane preparedness tips on our website here.