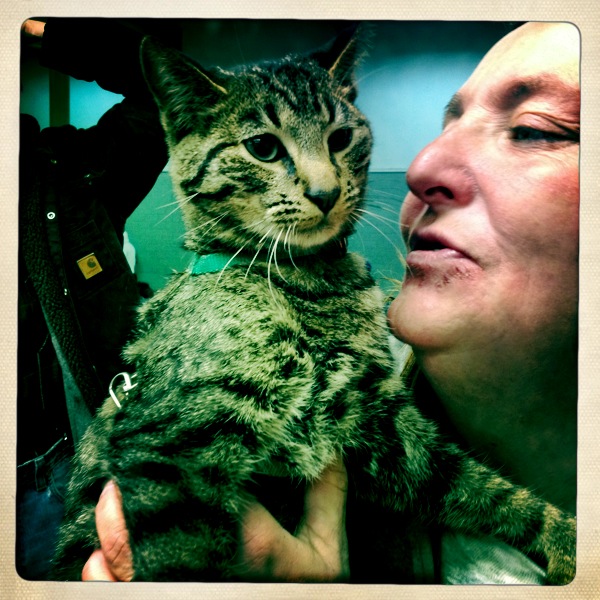 At 9 PM, dozens of people are streaming through the just-opened doors of the Imago Dei Community Warming Center. We, on the inside, have been reminded of the time by those outside, holding their cell phones to the window, and showing us we’re two minutes late getting the doors open.

Lots of these folks don’t look homeless. They tromp in with decent looking backpacks and rain jackets, ski pants, bikes… everyone takes a couple of blankets and heads into the gym to settle in on a mat.
Some look like they’ve been on the street for a while… a few with shopping carts, loaded to overflowing, rigs almost too big to get through the doors… bikes with trailers… men and women with dogs and cats. One guy turns around and leaves, cursing, with his pug tucked into his jacket when he finds out he’d have to put the dog in a carrier when he gets inside, even though he could stay right next to it.
All the pets and carts, bikes and bulky gear go over on the plastic… there’s a dozen pet carriers against the wall, some of them big enough for a german shepherd… people bed down next to their pets.
Some people look a little embarrassed to be here. Almost every one says thank you. It’s been raining all day and the snow started falling around 7:30 PM. Everyone looks soaked…
In 20 minutes, the place looks packed. We’ve got 150 mats spread out on the gym floor. Everybody is happy to get in out of the crummy weather… it seems pretty full, but Curtis tell me we’ve only got about 80 people, mostly men, a few teens… he says one time they crammed 300 people into the gym.
Larry is running the kitchen and he and Judy have put out coffee (decaffeinated, although we don’t tell anyone unless they ask), hot water and tea bags, hot broth and water.
I was lucky enough to be here tonight and found myself, yet again, being reminded of what little needs to be done to make an impact. I felt warmer on the inside by helping others feel warmer on the outside.
However many times and in however many ways we need to be reminded, there will always be something we can do to give ourselves and our neighbors hope.
The Oregon Red Cross has scheduled several orientation sessions, available in person or online, which cover the basics for warming center operations; staffing assignments; rules of conduct; and what to expect as a volunteer. Everyone who has volunteered in the past has wonderful stories from their experiences at the warming centers and we’d love to have you join us!