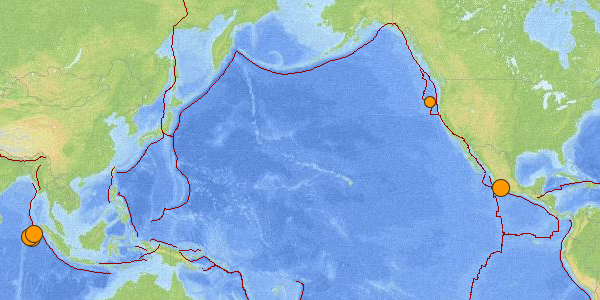 Are these Earthquakes related?
All of these earthquakes were along plate boundaries that make up the ‘Pacific Ring of Fire’, an area around the Pacific Ocean known for frequent tectonic movement. While a major earthquake can cause an ‘earthquake storm’ of aftershocks, these are all located relatively close to the initial quake. As for farther away, the science remains rather unclear as there are no clear relationships and the physics behind it is incredibly complex. There have been known occurrences of many major quakes within a small timeline, as with 2010’s Haiti and Chili earthquakes and last year’s Japanese and New Zealand earthquakes, leading to a new unproven theory of remotely triggered earthquakes.

Why did today’s Earthquake near Sumatra not create a giant tsunami like the one in 2004?
Plate boundaries are unpredictable, and while the area off Sumatra is known for being a subduction zone (similar to our own Cascadia subduction zone) that can create massive tsunamis, it depends on the type of movement happening between the plates. The 2004 quake had vertical movement that created a massive displacement of water, the foundation of a tsunami. Today’s was believed to have been mostly horizontal movement, in which there is little water displacement.

Could a 8.6 magnitude quake happen here?
Yes! Although we haven’t observed one in recent history, there is significant geologic evidence as well as historic records from Native Americans and the Japanese (which received tsunamis as a result). The last major quake was thought to have occurred in January of 1700. The next one could be any day – which is why it is important to be prepared!

Any other questions? Let us know in the comments below!

One thought on “Shaking up Earthquake Preparedness Month”